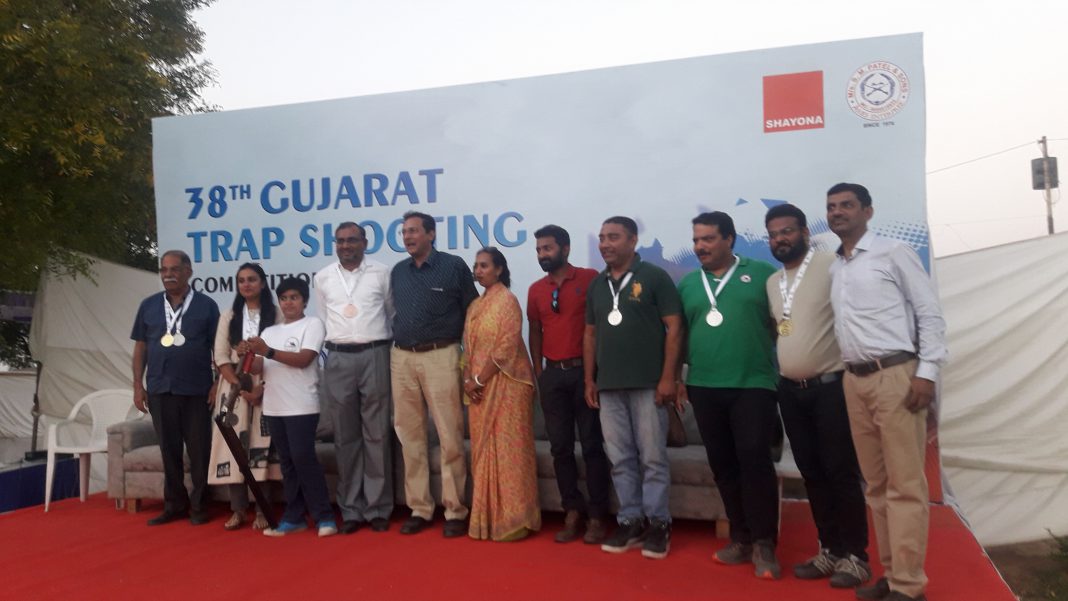 Savli Taluka Rifle Association shines at the 38th Gujarat Trap Shooting Competition as the shooters took away a total of 36 medals comprising of 11 Gold, 13 Silver and 12 Bronze medals.

The recently concluded 38th Gujarat State Trap Shooting Competition was organised by the Crowne Academy, Gandhinagar under the aegis of the Gujarat State Rifle Association. This is the basic launchpad for shooters to qualify for further participation at the Pre National and National level competitions.

The Savli Taluka Rifle Association represented Vadodara district with an impressive participation consisting of 45 entries in single trap, 31 entries in double trap, 5 entries in skeet and a total of 17 teams.  This was the single largest representation of any district through Gujarat state.

The rewards were equally commensurate.  Out of a total of 82 medals awarded, the STRA took away a total of 36 medals comprising of 11 Gold, 13 Silver and 12 Bronze medals.

Master Aryan Singh, aged 12 years was the youngest participant, while Robin Contractor, aged 73 was the oldest participant of the competition.

Chaitanya Desai, President of the Vadodara District Rifle Association expressed his delight at seeing this record participation and wished to see even greater involvement from the youth in this sport.

Gyaneshwari Singh, President of the Savli Taluka Rifle Association opined that with greater involvement of the corporate sector through CSR funding, it will be possible to bring down the cost of this sport and make it more affordable for a larger sector of society, thereby broadening the base and heightening the pinacles of success.

Ishwar Singh, Secretary General of the Savli Taluka Rifle Association expressed his special thanks to Ajay Patel, President of the Gujarat State Rifle Association for providing a great sporting platform to the citizens of Gujarat through the creation of various ranges across Gujarat.