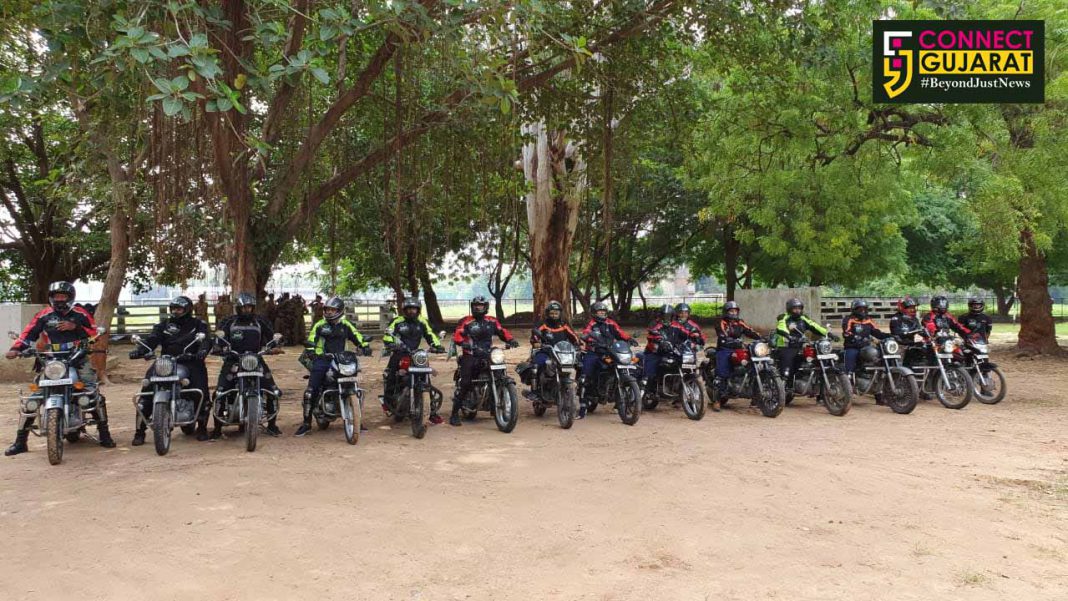 Celebrating 150th Birth Anniversary of Mahatma Gandhi the motorcycle rally Flagged off from National Salt Satyagraha Memorial’, Dandi reached Vadodara. Organised by Baroda Group NCC the cadets carrying the message of saving the earth and spread the message in people to love mother nature and nurture it for future generations.

The rally was flagged off from ‘National Salt Satyagraha Memorial’, Dandi, by NCC Baroda Group Commander, Brigadier Charandeep Singh, Sena Medal consisting of 16 riders NCC Cadets (8 Boys and 08 Girls) led by Colonel Umakant Sharma, CO 6 Gujarat NCC Battalion, Surat. The riders starting from Navsari on their bikes reached Narmada and then Vadodara headquarter on their second day interacting with people to contribute in saving the environment. The rally starts from 20 Aug to 26 Aug 2019 is under the aegis of Gujarat Directorate NCC keeping in sync with Pan India programme of “Mega Pollution Awareness Pakhwada”.

“We riders will be spreading awareness on water conservation, tree plantation, anti-pollution and green environment Initiatives by carrying out lecturers and nukkad plays especially at famous tourist locations of Dandi, Statue of Unity, Diu, Somnath temple, Dwarka temple, Gandhiji’s birth place at Porbandar and Sabarmati Ashram. Visiting the destinations of Somnath temple and Dwarka is to get connected with the tourists visiting these places. We are also touching the tribal and rural areas to aware the farmers to limit the use of urea in fields to save the land to become infertile,” said Colonel Umakant Sharma.

The riders consisting of eight girl cadets experiencing the adventure and responsibilities as a youth. “I joined the ride as a cadet from 6 Gujarat Girls Battalion NCC Surat and experience the adventure of riding. The most important thing is as a youth we are taking responsibility as a youth to aware people about saving the environment for future generations,” said cadet Shruti Vadher.

Many programmes are going to be held at Gujarat directorate and Pan India to celebrate the 150th birth anniversary of Mahatma Gandhi. “A cycle expedition on the same route will be starting in September end spreading the same message to people and ends at Sabarmati Ashram. A sea sailing expedition will also starts from Khambhat with 24 cadets on boats and 24 on road spreading the teachings of Gandhiji. They will be covering areas like Hazir, Surat and many others to culminate at Dandi beach on 2nd October connecting the people and mainly fishermen to aware about costal security,” said NCC Baroda Group Commander, Brigadier Charandeep Singh, Sena Medal.

Dharampal Gulati, owner of MDH, passes away at 97