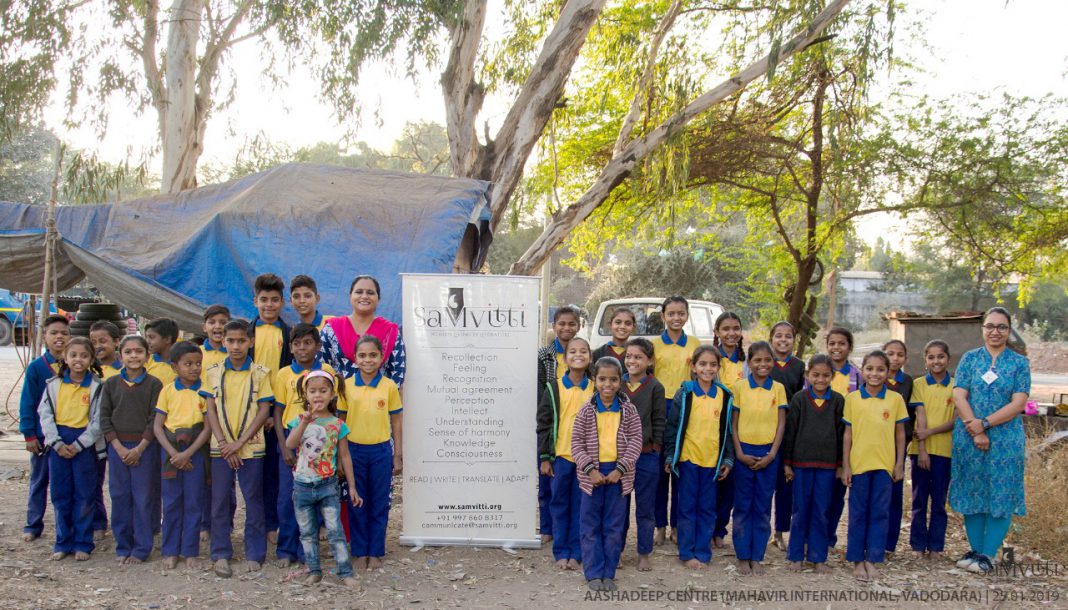 For SaMvitti Sharing Story SahityaMitra Naina Parmar shared a tale from the Mahabharata of Golden Mongoose with very young boys and girls of Aashadeep Centre of Mahavir International in Vadodara. The session was conducted by SaMvitti Foundation.

SahityaMitra Naina Parmar began the story where the eldest Pandav Yudhisthira became the King after the Mahabharata’s war ended. He attained the dominion of a vast empire by Ashwamegh Yagna and successfully started his reign. He often organized banquets for the poor and hungry people and used to feel proud by making such donation to the poor and the Brahmins. 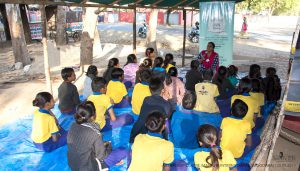 Once after the banquet, Yudhisthira thought that is there any other person in the entire world who has donated like this? Lord Krishna understood what Yudhisthira was thinking about. Lord Krishna immediately created magic.

After all the guests left, there was a little more food in the dining room where the meal was taken. Lord Krishna, Yudhisthira and other members of the Palace were sitting in the balcony and they saw a mongoose at the place where the food was served. The mongoose was not normal, his half body was of gold. The mongoose seemed to act very strangely and Yudhisthira tried to understand the reason by talking with the mongoose. The mongoose then shared a story.

He shared that at the time of severe famine and terrible hunger, due to lack of food, life became difficult. The mongoose went to a poor Brahmin’s house in search of food. The wife of that Brahmin was preparing food and the mongoose was waiting in an intention of grabbing some left-overs.

The reality was that the family of the Brahmin was hungry since past few days. They tried very hard to get some food-grains by begging but weren’t able to, so the whole family was very hungry. One day the Brahmin could get a little wheat flour so he was very happy to think that he could feed his hungry family today.

After saying their prayers in the evening the Brahmin family set to take their meal. There were only four ‘chapattis’ so each member could get one ‘chapatti’ in their plate. They were about to start eating when a beggar came to the door.

He was also terribly hungry. It was a difficult situation for the Brahmin to decide because on one hand his family was hungry and on the other hand he had to follow his dharma. In Hindu dharma, ‘guests are God’. Brahmin gave his chapatti to that beggar. After eating the chapatti, the beggar still felt hungry and asked for more.

So the Brahmin’s wife too gave her chapatti thinking that it was her duty to follow her husband’s suit. The beggar was still hungry and asked for more food. The Brahmin’s son gave away his chapatti and then his daughter-in-law also then gave away her chapatti. This was the final test of the family.

After eating all the chapattis, the beggar’s hunger was satisfied but all four members of the Brahmin’s family died because of hunger. The mongoose on seeing this turn of events got perplexed, but as he too was dying of hunger went to the kitchen to eat a little wheat flour that was left. The moment he touched that flour, some part of his body turned into gold. That was a miracle for the mongoose and he was waiting to see that miracle again. He tried many times at many places to have that miracle again but without success.

Today, he felt that his wait will be over as he was going to the ‘yagna’ by Yudhisthira but it did not happen like that. The mongoose felt sad. From this incident Yudhisthira understood that the donation of the Brahmin family was bigger than his donation. Yudhisthira is donating because he has a wealth of treasure and gave a small part of it in donation but the Brahmin family gave all that they had which took their lives too.

At the end of the session, the participants expressed their understanding about sharing, and mentioned about the positive habits they need to have in their lives. They agreed to respect and serve nicely to each one who came across in their lives and also do the same with the guests at home. They also understood that to fight with their siblings will not strengthen their relation with them. Three of the participants had written about the last story and submitted it to SaMvitti’s coordinator.

Naina Parmar said “I felt that by seeping among children the story of ancient myths, children can be more educated and cultured. Children can learn the spirit of hospitality and develop their capabilities with these stories. I felt satisfied that the children could learn the power of conviction from the story of Pandavas.”

One of the participant Shital Mahlvi said “I liked the story. I learnt that we should not fight with our siblings and live with unity. I knew that Lord Krishna and Arjuna are the characters from Mahabharata but did not know the story ‘golden mongoose’ is also included in Mahabharata.”