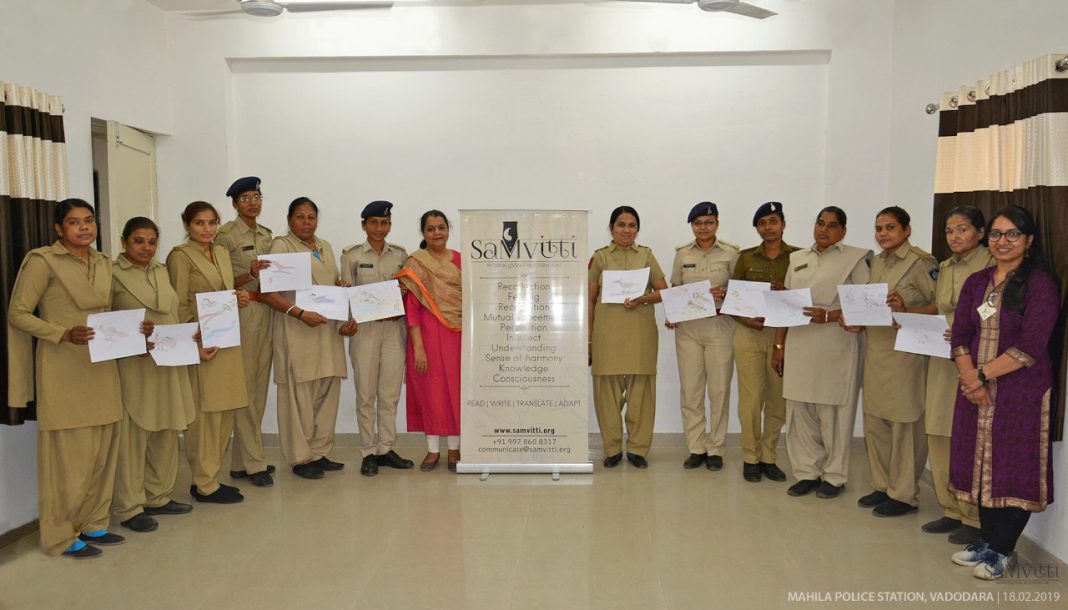 Talks about remove restrictions and freedom for women

For SaMvitti ‘Sharing Story’, SahityaMitra Shreya Sanghvi Shah shared a story by Swati Medh with the women staff-members of Mahila Police Station (Vadodara). The session was conducted by SaMvitti Foundation.

The session started with the discussion of the stories all have heard during their childhood. Participants spoke about several stories that they have heard, including the story of sparrows. Shreya shared the story is the same sparrows’ story with a more creative idea.

The story was about two sparrows named ‘Chako’ and ‘Chaki’. Both had made a nest and were living a happy life. Time passed and the couple had two beautiful kids, ‘Chiko’ and ‘Chiki’. Both the children were looking so alike that even the parents used to get confused sometimes in recognising Chiko and Chiki. The parents had a dream to make their kids very intelligent and brave like any other parents would do.

As both the kids were looking alike, Chako (Father) decided to put a dot (bindi) on Chiki’s forehead. When Chaki (Mother) got to know about this, she proposed to put a ‘bindi’ on Chika’s forehead as-well. Listening to that, Chako got angry on Chaki as a girl can put ‘bindi’ but a boy can’t. Chako himself then put the ‘bindi’ between Chiki’s two eyes.

Chaki used to see and understand everything but could not speak in front of Chako. She asked Chako to play with Chiki in the same way as he played with Chiko but he explained that Chiko is a boy and playing like that will make him stronger while playing with Chiki like that will injure her. Chaki found is appropriate not to argue with Chako and be quite.

Now, when Chiki grew-up, Chako thought of tying anklets to Chiki’s legs, as he thought, doing that would adorn her. Chaki again proposed anklets for Chika too but again Chako got angry on her. Now Chiki had ‘bindi’ on her forehead and anklets on her legs. As a mother, it was Chaki’s duty to nurture both her kids. While Chaki trained Chiki and Chiko to fly, she observed Chiko could fly fast and higher as compared to Chiki. Chiki had weight of her anklets so she had difficulty in flying so fast and high. Everyone around them was praising Chiko. People were praising Chiki too but for her beauty and not for her skills. Chaki wanted to build value for Chiki’s skills.

After some days, Chaki understood that the reason for Chiki’s discomfort was her anklets. Chaki decided to remove the anklets from Chiki’s legs but Chiki was hesitant. Chaki made her understand that we do not need to stop by anyone’s comments, you don’t need to fear and if you do so you will never be able fly high. At the end Chaki removed the anklets from Chiki’s legs and asked her to fly. The moment Chiki let herself fly, she felt the real freedom and she flew far-away…

At the end, participants visualized Chiki with earrings, anklets, hair-bun, heels and other visual expressions that portrayed femininity. After visualization, they all drew Chiki with eagerness and enthusiasm. They also discussed the reason why they remembered all the stories from their childhood. The reason was because it was an oral tradition and the stories that they have heard were shared further with coming generations.

Shreya Sanghvi Shah said “Today’s session was very elevating. All the participants travelled back to their childhood and remembered their childhood stories. I was very happy to see them draw from their imagination an Indian female sparrow.”

One of the participant Nilam Barot said “It was a refreshing story. A very new version of the same story that I have heard in my childhood. I had never expected to listen to this story in such way. We really have such ‘bedi’ (shackles) in woman’s life in the forms of restrictions. If those restrictions would be removed, women can fly so freely.”