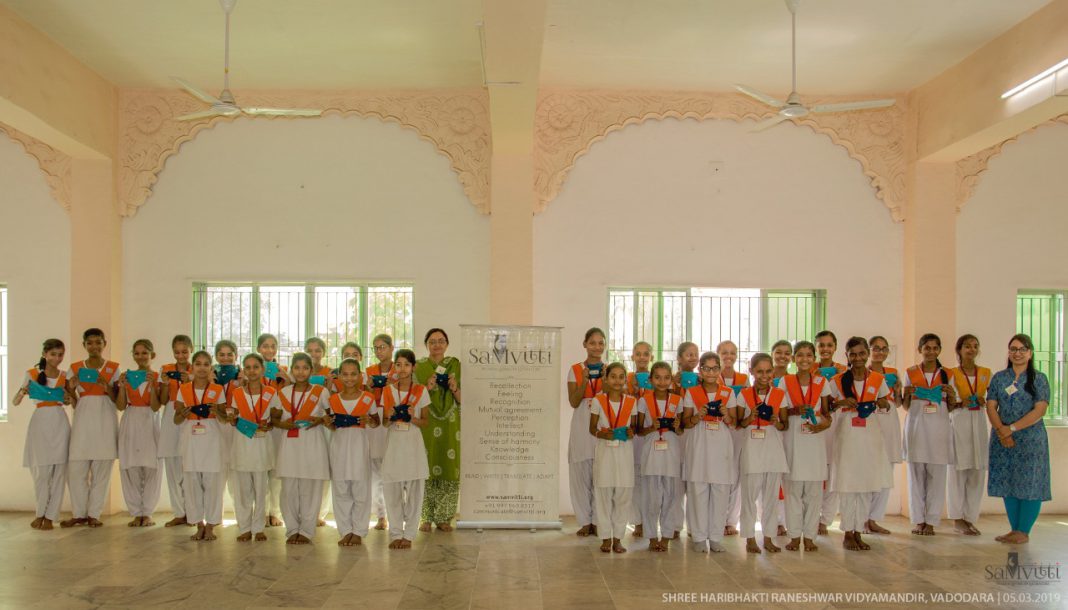 For SaMvitti ‘Sharing Story’, SahityaMitra Seema Trivedi Varia shared a short story by Suresh Joshi ‘Patch’ built on to understanding it from life’s perspective. The session was conducted by SaMvitti Foundation with young girls of Shree Haribhakti Raneshwar Vidyamandir in Vadodara.

The session started by describing the scenario of the story. Prabhashankar, when going out, used to wear a coat which was hung on a nail on the wall, put a cap on his head and drink water before leaving home. Parvati (Prabhashankar’s wife) used to give him the glass of water while she was alive. When Paravati was breathing her last, she tried to stop Prabhashankar from leaving, but couldn’t do so.

The moment he was about to cross the main door of the house, the sleeve of his coat tore-off. He then looked for a needle and thread to stitch the tear but could not find it. One day, he did find a thread and needle but then there was no one who could patch it for him. He managed to find a patch too but because of his age, wasn’t able to pass the thread through the needle-eye. This scene was seen from a distance by a boy named ‘Manu’ who lived in his neighbourhood. Manu offered to help Prabhashankar. Prabhashankar smiled and allowed him to help pass the thread through the needle-eye. Manu asked him to share a story as a reward.

Time passed and on the Prince’s sixteenth birthday, the King invited people for a treat. From those people, the King got to know that a very well-known saint has come to his village. The King and the Queen go to meet the saint and ask him to fulfil their wish that their Prince should always remain young and good-looking. The saint gave them a magical cloth which should always be clad on the Prince’s body and should never be taken-off. But, there was one condition, that if any one of the King or the Queen had any ill thoughts for the Prince, then a hole would appear in the cloth and the Prince would immediately turn into his actual age and looks.

In the Palace, they smeared a Swastik and then made the Prince put on the cloth. All were happy to see the prince so young. The Prince then got married and when the Princess became old, the Prince left her and married to a younger Princess. One day, as the King and the Queen were sitting in the balcony they heard a voice of a women crying. They looked around and found out that the woman was none other than the Princess whom the Prince had left. Seeing this, the Queen said, “It is better not to stay young for so long.” The moment she said that, there was hole in the cloth which Prince had worn. The Prince instantly turned to his actual age and looks. He came running to his parents. The Queen tried to patch-up the hole but could not do so. Gradually the King and the Queen died but the Prince never took-off that piece of cloth.

Manu then asked Prabhashankar the reason for the Prince not taking off the cloth. Prabhashankar explained that the Prince had the greed to become young once again and for that reason he still comes to their door to ask whether someone can stitch the patch on his cloth.

At the end of the story SahityaMitra compared the piece of cloth with life, the hole as unexpected difficulties that can be patched. She gave the participants a piece of cloth which had a hole and the participants were made to stitch a patch on that hole. She further explained that, though the patch would look shabby from the inside, it would always look pretty from the outside. Through the story the participants could understand that greed is like a poison in life and instead, one must accept the reality of life to be happy.

Seema Trivedi Varia said “From the story, I could convey that we have a solution for every situation in our lives. I am happy to explain that every situation cannot be a happy one in life, we have to make it happy like stitching a patch on a cloth.”

A participant Dhvani Raulji said “The story was interesting. How nice it is if we can stay young for the whole life. I think the cloth that was given to the Prince to stay young, so one such cloth could have been given to his Princess as-well so that she too can stay young forever and the Prince then might not have abandoned her.”