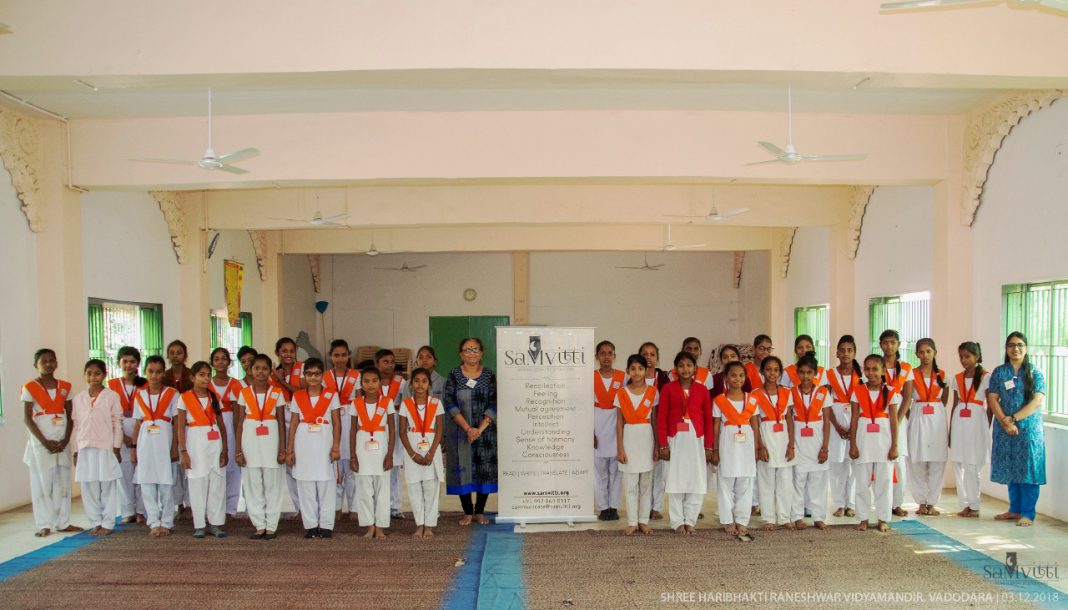 SahityaMitra Nita Dave shared the story of an inspirational short film ‘ABC’ directed by Madan RamVenkatesh with young girls of Shree Haribhakti Raneshwar Vidyamandir in Vadodara. This story is about one such girl who is living such a life. While she is looking for the meaning of life, how to find happiness is taught to her by a boy who is living a very modest life.

In the beginning of the story a working woman while writing a diary is thinking that why her life seems so empty despite having everything. She goes to work, and during a break she finds her car washed. She is surprised, and then she sees a young boy counting money. On asking, she comes to know that it was he who had washed her car. He gives a bill to the girl, and on seeing the quality of work, she pays him more than asked-for. The boy refuses (to take extra money) because of which the girl is perplexed and gets curiously attracted to him. She notes this experience into her diary.

The next day, the security guard is seen hitting the boy and pushing him out of the parking area. The girl rescues the boy and while sipping tea she has a conversation with the boy. In her conversation (with the boy), the girl finds the answer to the questions of her life. The boy says that he knows the complete ‘ABC’ of cars and he has a dream of making cars. To fulfill his dream the girl enrols the boy to a school to learn the remaining 23 letters of the ‘ABC’ so that he could pursue his dream.

During the storytelling, participants were able to discuss about their dreams and what all they liked. They said that they are interested in becoming a Doctor, Teacher, Fashion Designer and many other professionals. They also discussed about what made them happy.

After the story, the children were shown ‘ABC’ short film. At the end of the session, the participants discussed about the film and the story. They knew that the boy had received education and money because of his honesty, if he was not honest, he would probably not have been able to. They understood that many times people have lots of money but they cannot afford happiness, but a poor man can be happy with whatever he has.