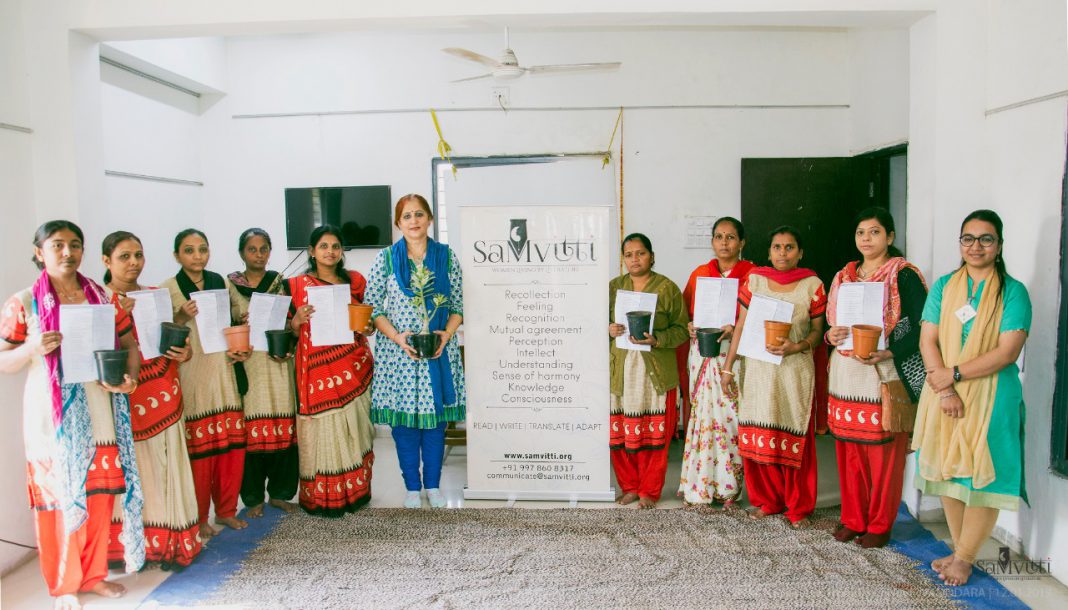 Women are so strong and believed to be Goddesses but in families they are tied-up with so many responsibilities and restrictions that they gradually start cutting-down their dreams and desires to fulfil the expectations of others.

The subject was shared by SahityaMitra Neha Sanghani under the SaMvitti ‘Sharing Story’ initiative to women members of Urban Primary Health Centre of VMC Vadodara. She narrated the story inspired from the poem ‘Bonsai’ by Alka Sethi with the session conducted by SaMvitti Foundation.

The session started with the recitation of the poem about Bonsai and never allow to flourish. Speaking about a small plant which grows into a tree, tall lavishly spread, holding itself high in comparison to the bonsai in the poem, where the roots and branches are cut, indirectly not allowing it to flourish. The sahityaMitra explained the poem and compared the bonsai with the life of Indian women.

The poem expresses the plight of a woman like the bonsai plant, where it is not allowed to go beyond. The woman is threatened that if she tries to stick her head out, or flourish, then she’ll be thrown-out from the premises or worse. At the same time, those same people express security and promise to be ‘providers’ at the cost of snatching-away her independence. They degrade her and lead her to believe about her being inferior. She is reminded time-and-again to not reach to the skies, instead, stretch her arms just within the boundary of the vase in her drawing room, as a piece of beauty. She is compared to a ‘bonsai’, and that’s where she is destined to die, in the vase, as-in the four walls of the house. Why, because she is a woman, an Indian woman…?

As the bonsai needs manure to grow again, Neha Sanghani showed the participants how to prepare that manure from vegetable waste, tea leaves and other items. After preparing that manure, she explained that the bonsai will grow with the help of this manure. Women, like bonsai, need manure too to grow and flourish.

She further stated that to shine in our lives we need manure which includes confidence, trust and conviction. Participants shared that we would not subdue our wish to follow our dreams and will help women whom we visit, to do the same.

One of the participant Kailash Solanki said “The story was good as we learn new things every time. I really liked the way a tree was compared to the life of women. A woman really ignores her likes and desires for the sake of her family and is never able to give time to her own self. I would like to share this thought of growing by self-confidence just like manure with other women whom I meet daily.”