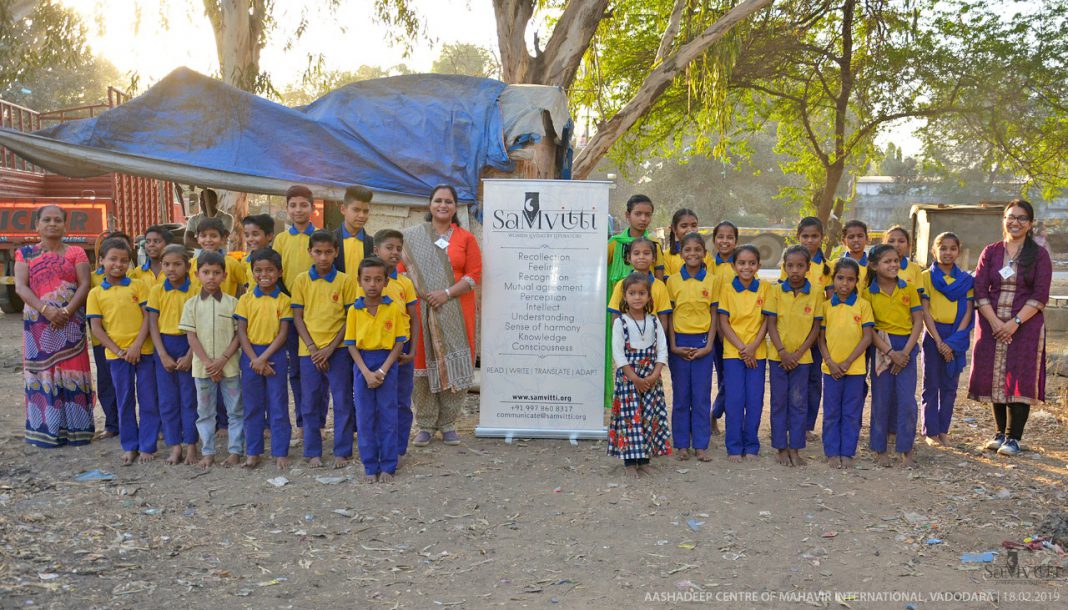 For SaMvitti ‘Sharing Story’, SahityaMitra Naina Parmar shared a story from ‘Katha Sahitya’ about child devotee Dhruva with very young boys and girls of Aashadeep Centre of Mahavir International in Vadodara. The session was conducted by SaMvitti Foundation.

The session was initiated with the discussion about our galaxy where the SahityaMitra asked the children about the stars in the sky and the brightest of them all Dhruva. Later she began the story of Dhruva from his childhood days.

Naina Parmar then began the story of Dhruva star who was once a very young child who did penance and took place in God’s lap and became immortal.

King Uttanpada was the son of Brahmaji’s son, Manu. He married to a beautiful woman named ‘Suniti’. The King loved his wife very much but the Queen could not give birth to a child, so she asked the King to get married to another woman. As the King loved Queen Suniti, he denied doing so. After some arguments, the King then agreed and married to ‘Suruchi’. When Suruchi came to the Palace and got to know about the King’s first wife, she asked the King to send Suniti into the forest. Listening to this, Suniti voluntarily left the Palace and started living in the forest.

After some days, the King went to the forest for hunting and got injured. When Suniti got to know about this, she brought the King to her cottage and cured him. During that period Suniti got pregnant and gave birth to a boy named ‘Dhruva’. The King was not aware about it. After some days the King returned to his Palace. In the Palace too, Suruchi gave birth to a boy named ‘Uttam’.

When the King was informed about his son Dhruva, he invited Suniti to the Palace but Suniti denied. Though Suniti never came to the palace, she used to send Dhruva to his father. Seeing this, Suruchi got jealous. One day, Dhruva was sitting in the lap of his father. Suruchi came and behaved disrespectfully with Dhruva.

Young Dhruva narrated the whole incident to his mother, Suniti. Suniti inspired him to do penance and take place in God’s lap and become immortal rather than craving for his father’s lap. Young Dhruva was impressed with the idea. He went to the bank of river Yamuna to do penance. Seeing Dhruva’s condition, Narad Muni came and explained to him the way to do penance. Dhruva stood on his toe and did very hard penance. He repeatedly chanted the shloka, “Om Namo Bhagvate Vasudevay Namah (ॐ नमो भगवते वासुदेवाय नमः)”.

Seeing him in deep penance, Lord Vishnu appeared. Dhruva told Lord Vishnu about the incident that Queen Suruchi had did with him and asked Lord Vishnu to take him in his lap. Lord Vishnu fulfilled his wish and gave his blessings. So, even today, the ‘Dhruva’ star is seen shining brightly in the north of the sky.

At the end of the session, participants shared that obeying elders and Gurus takes individuals ahead in life. Participants then made origami stars which they could partly finish. The remaining part of the star will be completed in the beginning of the next session.

Naina Parmar said “Young Dhruva made his place in the sky. In the same way, self-confidence and faith on the Guru can help one face the challenges in life. I could see that shine in the participants’ eyes in today’s session. Now the children get engrossed in the session and I am happy about it.”

Participant Prafulla Damor said “The story was good. I knew about the Dhruva star but did not know the story. Today, after listening to the story, I understood that big dreams can be achieved by doing hard work and following elders’ advice like Dhruva.”