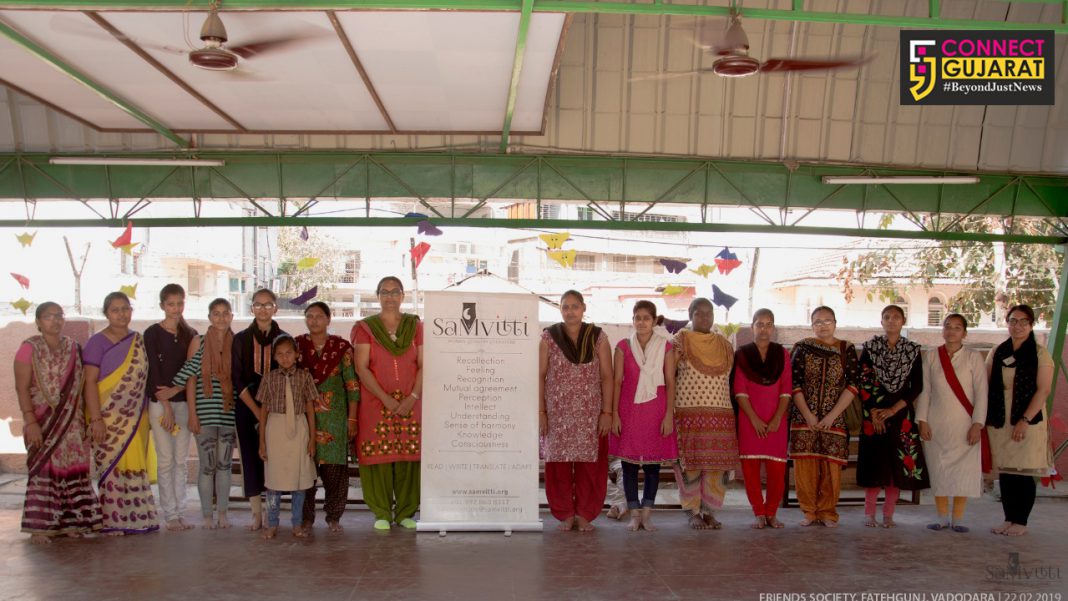 With more and more concrete jungles are coming up the natural environment is slowly vanishing from the city maps. Without any stable steps we are staring at the time when global warming becomes more active and that only because of absence of trees.

Lots of efforts is carried out to save the environment but still awareness is necessary to put in extra efforts from everyone. SahityaMitra Mital Shah shared a short story by Labhashankar Thakar ‘Trees’ with women-beneficiaries of the Friends Society in Vadodara. For SaMvitti ‘Sharing Story’ initiative the session was conducted by SaMvitti Foundation.

To illustrate this story, questions were asked to the participants about the usefulness of trees. SahityaMitra asked about the basic needs of our lives, air to survive and for both we have to depend on trees and instead of cutting them we grow new trees. The participants replied with positive response and eager to listen the story of the tree.

There are four main characters in the story – Chaku, her mother Indira, Chaku’s father Champak and Chaku’s grandfather. Chaku, a joyful daughter of a small middle-class family takes her father to bath in the rain under the roof of the house. Though fearful of getting cold, the father stands under the falling rain. Chaku dances around her father and sings a song.

After the rain stopped, when Champak tried to move both his legs one-after-another, he couldn’t lift his legs. Seeing this, Chaku called her mother and grandfather. Grandfather thought that he is kidding but then Champak is standing still and says, “I am a tree”. The mother and the neighbours try moving him but in vain. Doctor came and gave him an injection but still Champak is not able to move and is gradually turning into a tree.

Now birds have started to come and sit on that tree, people have started hanging clothes on it. Gradually people start visiting the tree. Chaku’s friends when they come to play at her house look at Chaku’s father in dismay. People now start visiting to see the tree and because of which the family start earning money and the tree became the source of income for the family.

The family is now rich and happy and decide to renovate their house. In the process of renovation the family find the old tree in the courtyard a hindrance and so they decide to cut it off. Only Chaku does not like that as she still has hope that her father will move and play with her one day.  It’s only the little Chaku that clings on to the tree and weeps, but everyone else seems happy.

How human-beings become selfish, forgetting their own upbringing and destroying their own base. This is realized in the story.

At the end of the session, participants were asked to assume the story further that what could have happened after the tree was cut-off. They expressed that the family might get poor again as they have lost their source of income. For the story, participants shared that it was an unbelievable story that a human can become a tree. Also it gives a message that one should be sensitive towards trees as trees are important for survival and reducing pollution.

Mital Shah said “It was interesting to talk about the importance of trees. To know that trees are life-giving, participants have taken a pledge to grow more trees and not cut them. I feel happy to have made a successful experiment.”

One of the participant Lakshmi Jaiswal said “The story was good to understand the importance of trees. It was a different experience as it is not possible that a human can become a tree, but from the story, I understood that emotions are important. When emotions are taken for granted, the relationships end.”