Focuses on achieving our goals in life As part of SaMvitti ‘Sharing Story’, SahityaMitra Jesal Jethwa shared a true life-story titled ‘Heroes of Darkness- Rabiya Khan’ from the book ‘Touch the Sky’ by Rashmi Bansal with young girls of Kubereshwar Prathmik Kanya Shala. The story focuses on the perspective of our limitations for achieving our […] 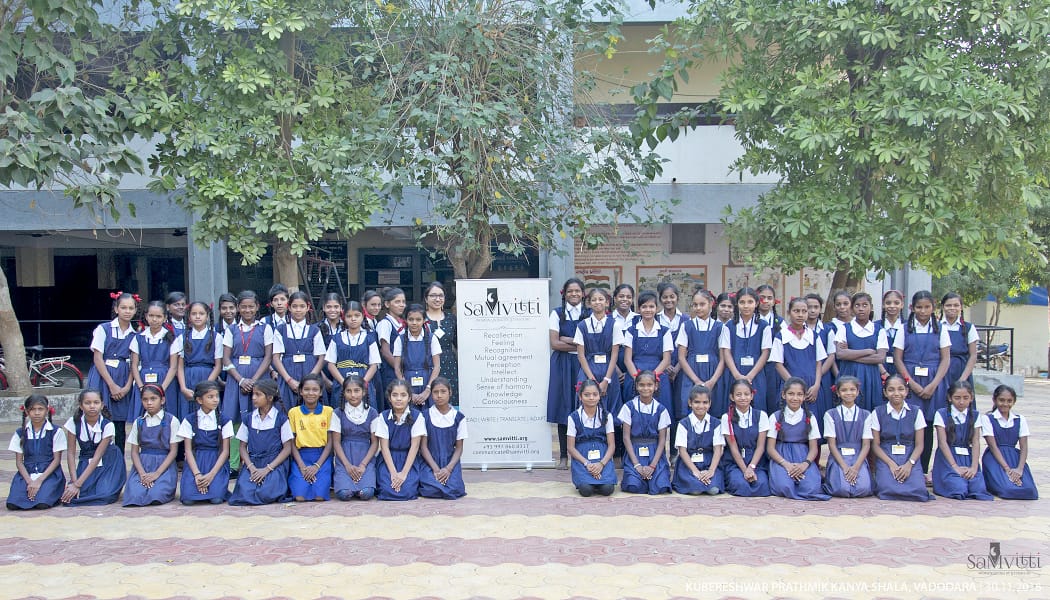 Focuses on achieving our goals in life

As part of SaMvitti ‘Sharing Story’, SahityaMitra Jesal Jethwa shared a true life-story titled ‘Heroes of Darkness- Rabiya Khan’ from the book ‘Touch the Sky’ by Rashmi Bansal with young girls of Kubereshwar Prathmik Kanya Shala. The story focuses on the perspective of our limitations for achieving our goals in life.

The session was initiated with the questions about the participants’ goals as it could be a simple goal or a long-term goal. The plan and possibilities were discussed followed by their possible obstacles. Gradually the participants were asked if they had any physical limitation, and then introduced Rabiya Khan to them by showing them her photograph.

Rabiya Khan was born blind. She was the youngest of the four siblings. Rabiya’s father was very supportive. He believed that every problem in life has a solution. He enrolled Rabiya into the blind school where the subjects were taught in braille. When she came in 6th standard, her father decided to enrol her in Sanyogitaganj Higher Secondary School (Indore). It was a school for normal children. Since she could not see the blackboard, she used to bring her friend’s notes and copy it in braille with the help of her sister. After passing the 10th standard, Rabiya joined Islamia Karimia Girls Higher Secondary School. In the meantime, Rabiya had started attending computer classes. Now she was able to operate the computer independently with the help of JAWS (Job Access With Speech) software which converts text to speech.

Rabiya decided to pursue law as her career and secured admission in Devi Ahilya Vishwavidyalaya (Indore) after a lot of struggle. As she practiced Islam she had to read the holy Quran. Rabiya used to listen to an audio version but her heart longed to read it. The fact was that the braille version of the holy Quran printed in Karachi was in Arabic language. And also, it was a tad bit expensive for her family to buy that Quran. And moreover, she knew English and Hindi in braille but could not follow Arabic in braille.

To learn Arabic language Rabiya opted to go to Aligarh Muslim University. After many difficulties and humiliating experiences, she was now able to read Arabic in braille as-well. It came a time when her family decided to undertake the Hajj pilgrimage. The State Hajj Committee rejected her application saying, “Blind pilgrims are not allowed in Mecca.” As Rabiya was a student of Law, she asked for proof. The matter reached to the higher authority and eventually she was allowed and she could complete the pilgrimage. Rabiya thought that she is quite lucky to have the opportunity to build her life by learning computers, studying Law or reading the Quran in Arabic braille; but everyone was not so lucky.

Being in the third year of studying Law, she managed to start an initiative for the blind where she taught them. With the help of her friends she made a hand-written copy of the Quran in Arabic language and printed them in 6 volumes. She now wishes to expand her centre, provide hostel facilities, latest technology and many other services.

Participants were given the hands-on experience of braille. They tried to touch and understand how the text was felt rather than read. At the end of the session, participants were shown videos where in one video the biography of Rabiya Khan was discussed and a clip was included of her receiving the National Award at the hands of the-then President of India Shri Pranab Mukherjee. The other video showed Rabiya Khan giving a motivational speech.

Participants could relate to the story and got inspired to have a bigger vision in their life.