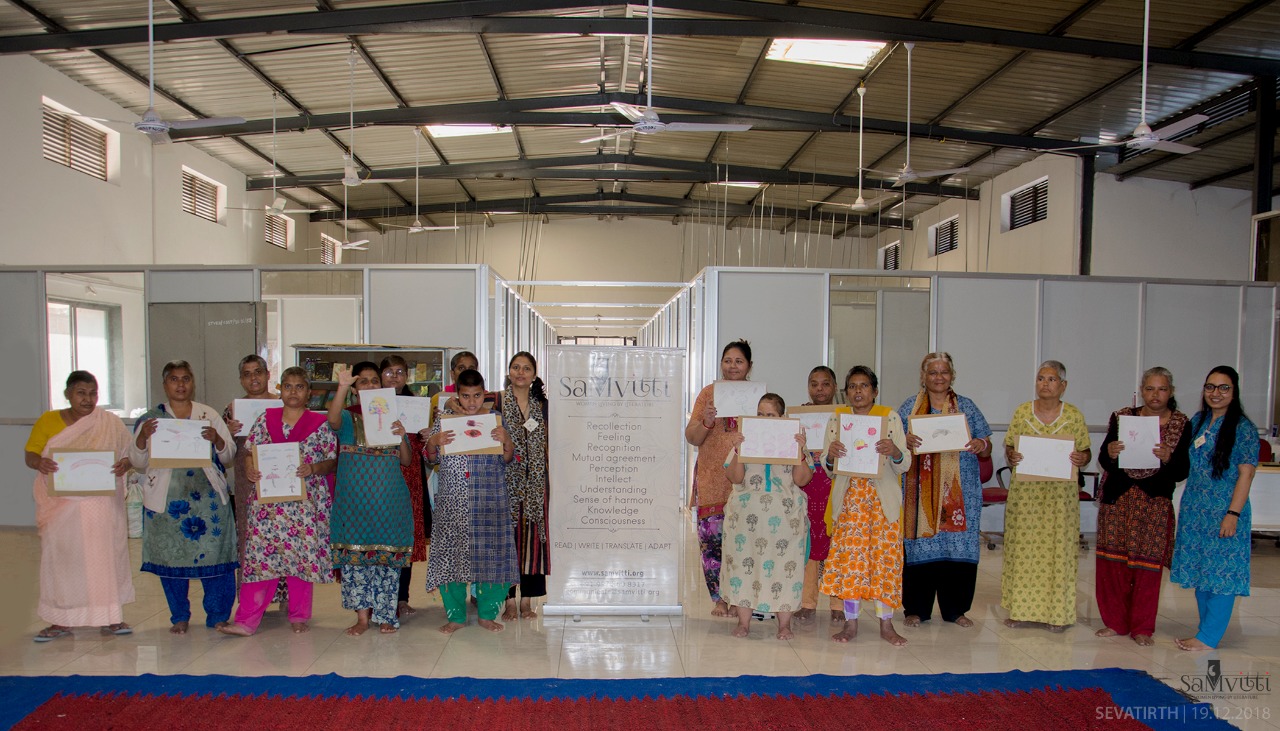 Took the participants to the beautiful world of fantasy.

Based on such theme SahityaMitra Himangani Lakhera performed a monologue of the story ‘Fatima and Her Umbrella’ by Yunus Mohamed with women-residents of Sevatirth in Vadodara. The participants were taken on a sky ride through the story where the narrator play the role of the protagonist and took the participants into a world of fantasy through a journey of imagination.

The story ‘Fatima and Her Umbrella’ revolves around a young girl who while returning from school happens to fly in the sky along with her umbrella due to a strong gust of wind. The story is about her experience of being in the sky - riding over the clouds, mountains, beautiful bridges, over waterfalls and colourful rainbows.

The story begins where Fatima was very happy as her English teacher appreciated her efforts and gave her a chocolate for doing well in her English test. As the school got over she walked towards her home which is very near to her school. While Fatima was walking towards her home, it started raining and she had to open her umbrella. She was trying to hold both, her school bag and the umbrella while protecting her from getting wet. The rain came down hard along with wind. Suddenly a gust of wind blew Fatima up and towards the sky and through the clouds with her umbrella. Fatima was amazed to see herself soaring higher and higher up towards the sky.

The wind made Fatima fly all around up and down, left and right but she clasped on tightly to the umbrella with both her hands. She could see her house next to the park, her puppy ‘Jewels’, her bicycle and her mum hanging the washing.

Suddenly two birds landed on Fatima’s umbrella. At first Fatima was very frightened to see such wide wings and sharp beaks so close. “Do you like the view below?” one of the birds asked Fatima in a very friendly voice. “Yes I do, but everything looks so tiny from here” Fatima replied. “Come let us take you to a magical place” the birds said together.

Soon Fatima was flying over rainbows of magical colours. She could see below her Unicorns dancing in a meadow with little girls in white and pink dresses in a circle holding hands laughing and singing happily.

The sun waved at Fatima and told her that because she was upset by all the rain, she has been brought up to the sky to visit him. Fatima was all glad to hear this and thanked the Sun for making her afternoon so special.

Fatima met many other young girls there and they all welcomed her to play with them. After a while they made tea and baked a chocolate cake for Fatima. Fatima had never eaten a tastier chocolate cake before. The children sang, danced and played all sorts of games, for hours, still the sun shone so brightly. Fatima was enjoying it all. They all rode over mountains and beautiful bridges, over waterfalls and rainbows. They played together on all the different rides, eating ice cream chocolates, and cakes to their hearts content. Suddenly Fatima thought of her brother Yusuf at home and felt sad. When everybody asked her the reason for her being sad she expressed her wish to be back with her brother.

The birds then brought Fatima’s umbrella and lifted her with their beaks high into the sky for a while longer. ‘Bye sun, and thank you again’ Fatima said to the sun. The sun smiled and waved at Fatima. ‘See you in the morning Fatima’ the sun said before the birds lowered her gently to the ground just outside her house next to the beautiful park. Fatima waved at the birds as they flew higher and higher into the sky.

“Yusuf, Yusuf, you won’t believe what happened to me today,” said Fatima as she ran into the house. Yusuf smiled, and hugged Fatima. Fatima was happy to be at her home as she had a wonderful day.

The zest of the SahityaMitra while narration, infused a sense of heightened imagination and eagerness amongst the participants enjoyed the story thoroughly. They visualised the situation where they can fly and discussed that if could fly they’d like to go home, visit temples and many other places. After the story-session a participant got inspired and very enthusiastically shared a story and a song.

At the end of the session all got engaged in drawing the things that they could remember about the story. Each one of them expressed their unique creativity with drawing and then filling them-up with wonderful colours.