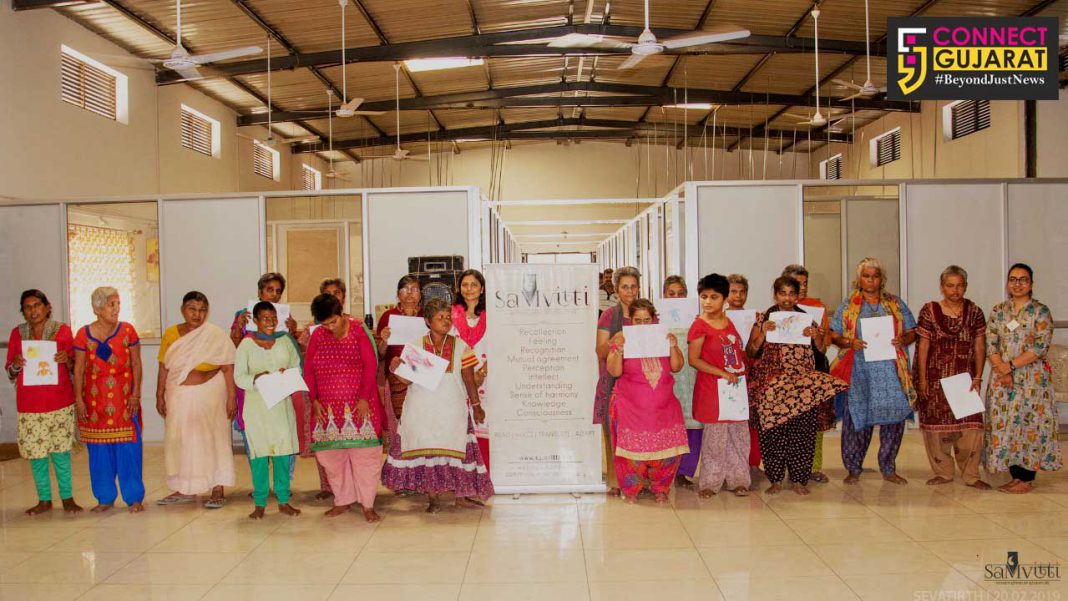 For SaMvitti ‘Sharing Story’, SahityaMitra Himangani Lakhera shared a story ‘Kabuliwala’ by Rabindranath Tagore with women-residents of Sevatirth in Vadodara. The session was conducted by SaMvitti Foundation.

The story ‘Kabuliwala‘, portrays the unconventional friendship between a dry-fruit seller and a little girl.

Mini was a five-year old girl full of life. Once Mini was playing in her room when suddenly she left playing, and ran to the window, crying, “Aye Kabuliwala! Aye Kabuliwala!” Sure enough, on the street below was a Kabuliwala passing-along slowly. As soon as Kabuliwala heard his name being called, he stopped and entered their doorway.

Since the man had been called, Mini’s father made some small purchases and a conversation began. When Kabuliwala was about to leave he asked about Mini. Her father brought her out. She looked at Kabuliwala and his bag. He then offered her nuts and raisins. This was her first meeting with the Kabuliwala.

The Kabuliwala had overcome the child’s first terror by a judicious bribery of nuts and raisins, and the two were now great friends.

One morning Mini’s father saw the Kabuliwala in handcuffs, escorted by two policemen. On enquiring, Mini’s father came to know that the Kabuliwala had a fight with someone and was sentenced to some years’ imprisonment. Time passed, and Mini gradually forgot about her friend.

Years had passed. It was the day of Mini’s marriage when suddenly the Kabuliwala appeared at Mini’s house. He greeted Mini’s father and expressed his wish to meet the little girl. When he saw Mini, clad in a red silk saree on her wedding-day, with the sandal paste on her forehead, and adorned as a young bride, the Kabuliwala looked a little staggered. He could not revive their old friendship.

When she had gone, he heaved a deep sigh, and sat down on the floor. The thought had suddenly come to him that his daughter too, at his homeland, must have grown in this long time.

Himangani Lakhera said “The session gave me a sense of satisfaction and happiness by being able to connect to the participants through unconditional and pure love of Kabuliwala.”

One of the participant Dharmishtha Chauhan said “The story was good. The friendship between Mini and Kabuliwala was nice and different. Kabuliwala seems to be a second father to Mini. I enjoyed.”