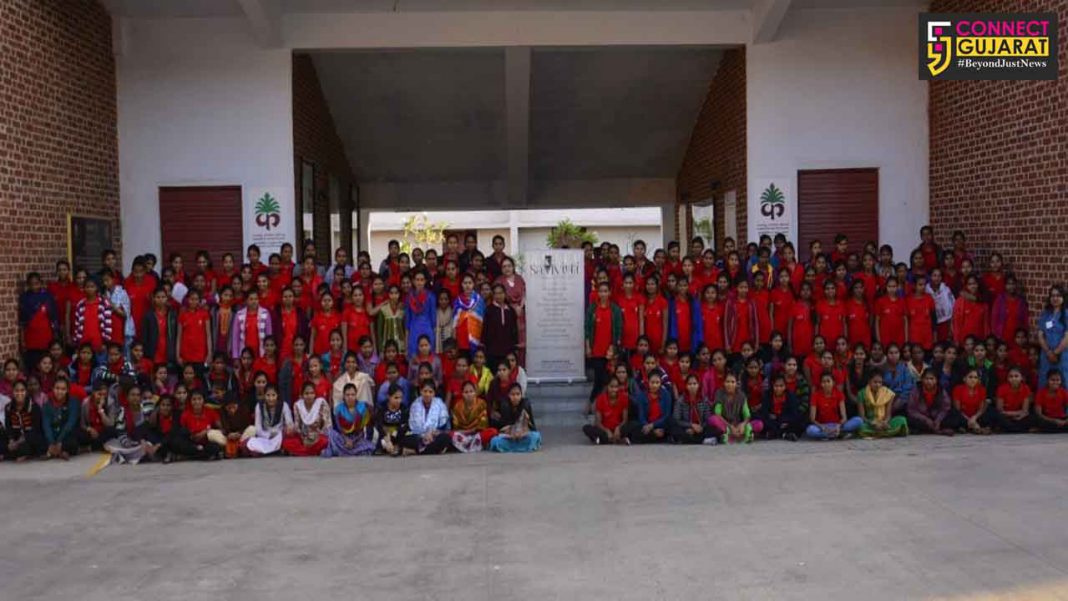 For SaMvitti ‘Sharing Story’, SahityaMitra Darshini Dadawala, based on the world-renowned Greek tragedy ‘Agamemnon’ written by Aeschylus, talked about ‘Catharsis’ by introducing the heroine of the drama ‘Clytemnestra’ with tribal girls of Shroffs Foundation Trust’s Vivekanand Institute of Vocational and Entrepreneurial Competence at Paldi. The session was conducted by SaMvitti Foundation.

The session started with a small conversation by inviting some participating friends to the panel where they were asked some questions by SahityaMitra.

SahityaMitra asked When you go to play in a garden and if dust sticks to your body, do you like it? And the answer was No from the participants. Second question was So what do you do to remove the dust? The answer Go home and clean it… Wash the dust of the body.

Third one was, Just like one does not like dust on their body and we go and wash it, in the same way, if in life, one has experiences that one does not like and if it stays on the mind, then how can you remove it? The answer, Try to get rid of the dismay by watching TV.

The next question was But what if the dismay is big and can’t be gotten away by watching TV, then what? The answer Start to have feelings of confusion, uneasiness and wouldn’t know what to do, but feel sadness, anger and restlessness. Finally SahityaMitra concluded the question answer session with final one Do you want to know how to be free from that dismay? The answer was, Yes… Surely.

Later the session begins where SahityaMitra informs that by saying ‘two’ things, I will be telling you ‘one’ story. All participants enthusiastically agree. She then makes them pronounce the term ‘catharsis’ often, and then asks if they know the meaning of that word? The participants answer in a negative. She starts telling the story ‘Agamemnon’ and says that if you understand this story carefully then you will understand the meaning of the word ‘catharsis’… All the participants start listening to the story.

Agamemnon and Clytemnestra are the King and Queen of Argos. They have four children. Helen, the sister of Clytemnestra is kidnapped by the King of Troy and to take revenge, Agamemnon seeks war against Troy. In his absence, Clytemnestra takes care of the administration of Argos and falls in love with Aegisthus.

On the King who is out for war, the Goddess of the hunter and the prey, Artemis, is upset and the vast ocean gets violent and rises high. It is not possible to reach Troy without crossing the ocean, so Agamemnon requests the Goddess to let him pass. The Goddess asks for the sacrifice of Agamemnon’s daughter, Iphigenia. With a heavy heart, the father sacrifices his daughter and that news reaches to Clytemnestra who gets filled with rage. How can a father give a daughter’s sacrifice without asking the mother? She lives with this resentment for years.

Agamemnon, on winning Troy, returns to Argos after ten years. The people and Clytemnestra enthusiastically celebrate the return of their King after a decade. Everyone thinks that the King has returned after ten years and Clytemnestra is very happy. The behaviour of Clytemnestra in public is as expected, but when time comes of spending solitary moments with Agamemnon in the palace, Clytemnestra, along with the help of her lover Aegisthus, murders Agamemnon and his mistress Cassandra to avenge her resentment.

During the description of the events of the drama, the SahityaMitra narrated some dialogues from the original text and gave a direct introduction of the world of emotions of all the characters. When Iphigenia is to be sacrificed, Agamemnon is to return to Argos after winning Troy, at that time, Clytemnestra announces the celebration of his reception, after killing Agamemnon, what she expresses… listening to these dialogues made the participants go closer to the text.

Iphigenia killing – ‘The religious leaders asked him to hang her with the head down on the altar. She was hung like a sacrificial beast. Her clothes fell down. She begged and screamed. The father ordered to tie-up her mouth. During the rituals, if such a disturbance occurs and if the Goddess is displeased, and on the father’s rule, on the family, on the army, on the expected work, if some obstructions come-up, how could that be now tolerated?’

After hearing the news of Agamemnon’s return, Clytemnestra says – “My beloved husband, now you get down of the chariot. But no. The defeater of Troy, don’t put your feet just like that on the soil. Maids, do as told. Be quick. Lay a red carpet on his path. Place a silk carpet under the feet of my Lord…”

After killing Agamemnon, Clytemnestra says – “Being happy or mournful is a matter of your understanding. I am glad. I am happy. If on a dead man, on a corpse, sitting on it for some rest or to be thankful, if having a drink as a toast can be considered appropriate, then we can get as much toast one wants to drink from this house.

A video clip of the performance in a dramatic stage of the climactic moments where Clytemnestra and Aegisthus kill Agamemnon and Cassandra was shown to the participants to get a profound experience of the climax.

The participants were stunned after this experience. SahityaMitra again started a dialogue with them.

She asked, Do you think it was appropriate what Clytemnestra did? The participants give mixed reviews. Second one was, Did you know? The murder that Clytemnestra committed, what is it called? Participant said After a while of thought, ‘catharsis’.

SahityaMitra said Absolutely right. The grief of her daughter’s sacrifice that lie in her heart, after ten years, comes out in the form of her suffocation, that she kills her husband… catharsis is an obvious phenomenon. But we should consciously see that will it give positive results or negative.The participant nod, That’s right.

She asked What can Clytemnestra do if she wishes for a positive catharsis? No answer from the participant. Finally she asked If I was in the place of Clytemnestra, I would have quieted my mind by planting a tree and raised it with utmost care and everyone shake their head and accept it.

SahityaMitra said that there is great power in ‘catharsis’. But in order to be positive, we need to have that energy within… To achieve this, we need to get the energy by requesting the power that has given us life and all together.

Darshini Dadawala said “Informing the participating young girls about the world-famous tragedy does give me great pleasure, but their ability to assimilate the Greek drama was unimaginable for me. I came to know about ‘catharsis’ much later in life, and I felt that if I had known about it earlier, it would have been very good… To be able to have given the information about ‘catharsis’ to these young girls at this stage of their life, the self-satisfaction of it will remain within me for my lifetime.”

One of the participant Manisha Damor said “The session was very good. Today I learnt a new word ‘catharsis’. The story was very mysterious and interesting. As a mother, she put-up with her anger for ten years, it is a big thing, and if it would have been anyone else, wouldn’t have waited for so long.”