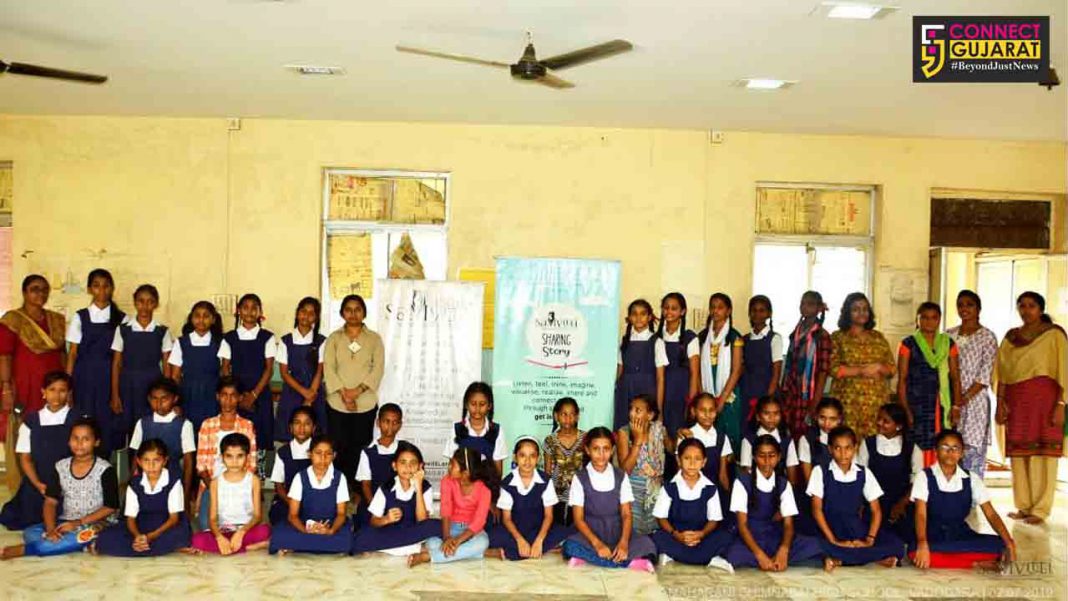 SahityaMitra Chaiti Vinod Salunke shared a soul-stirring tale of compassion by Gaurishankar Govardhanram Joshi ‘The Post Office’ with the young SahrudayMitras of M. C. High School in Vadodara. The story shows the pain of parents when their children go away from them.

Chaiti began by letting the listeners know the story she is going to narrate is considered to be in the list of the 10 best stories in the world. She stated the story shows the pain and longing parents go through when their children go away.

She began the narration of the story of an old coachman ‘Ali’ who used to walk down to a post office every day in the morning since last 5 years. He would sit in the corner of the veranda and wait for the clerk to announce his name for receiving a letter from his daughter Mariam. She was his only daughter who was married to a soldier and living at a far-away place. Ali was longing to hear from her.

After 5 years came a time when for several days, Ali was not seen in the post office. Everyone noticed this but nobody had sympathy enough to find out what really happened to him. At last, one day, Ali came again, but, now it was difficult for him even to breathe and there were clear signs of his approaching end.

He met the postmaster and asked him if there was any letter from Mariam. As the postmaster was in a hurry, he got annoyed and scolded Ali by saying that, “If the letter had come, he would not eat away his letter. It would be delivered to him obviously and the postmaster left. Ali called a clerk Lakshmidas and gave him five golden coins and asked him to deliver Mariam’s letter to his grave if it came. The clerk accepted the coins and agreed to do that. Slowly Ali left from there and was not seen by any one after that.

One day, the postmaster’s daughter who lived in another town fell ill and he was anxious to hear from her. He searched for a letter from his daughter from the pile of letters and surprisingly found a letter which was addressed to ‘Coachman Ali’.

Having gone through the pain himself, now the postmaster remembered how he had scolded Ali and realized how much his temper might have hurt Ali. He called Lakshmidas, the clerk, and asked him to find out where was Ali. He kept Mariam’s letter with himself.

The whole day postmaster kept on waiting for a letter from his daughter but did not receive a letter. He kept worrying about her health. As he was able to experience the suffering himself, his attitude toward Ali changed. He decided that he would himself hand-over Ali’s letter. But sadly, Lakshmidas came with the news that Ali had died three months back.

The postmaster felt sad and still had Mariam’s letter in his hand. That evening postmaster went to Ali’s grave to place the letter there. After keeping the letter, he stood there silently and in those moments understood the importance of connection and separation. And this connection keeps us alive with joy and hope.

When the story ended, one of the Sahrudays wept on remembering her mother who was away since few days. The Sahrudays at the end wrote a postcard to their father inquiring about his health and well-being and thanking him for his care and support.