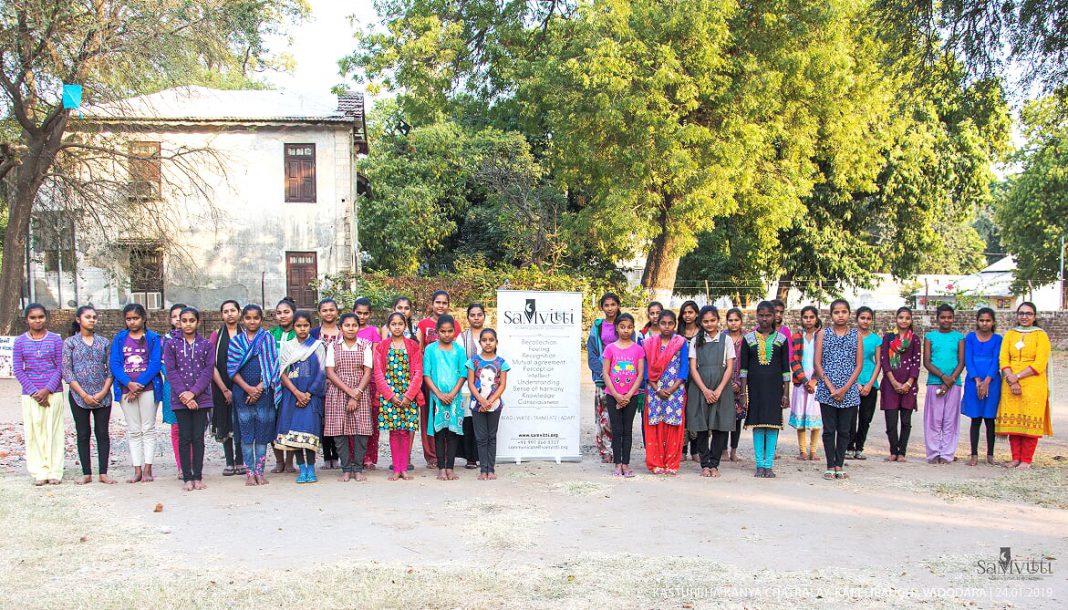 For SaMvitti Sharing Story, SahityaMitra Chaiti Vinod Salunke shared a biographical story of ‘poems of Meera Bai’ ‘by Bhupendra B. Trivedi with young girls of Kasturba Kanya Chhatralaya in Vadodara. The session was conducted by SaMvitti Foundation.

The session was initiated with the basic discussion about what participants already know about Meerabai. They imagined and then described how Meerabai would have looked.

Chaiti then shared the facts about Meerabai to the girls. Meera, also known as Meera Bai or Mirabai (1498-1546) was a Hindu mystic poet of the Bhakti movement. She referred to the Lord, whom she saw as her husband, with different names like Satguru, Prabhu Ji, Girdhar Nagar and Krishna. She even called him the husband of her soul. Due to her mother, her in-laws disapproved of her public singing and dancing as she belonged to a royal family of Mewar and was a princess. But she had too much love for her God and sacrificed everything, even her family and attained Moksha through Bhakti Yoga. She is a celebrated Bhakti saint, particularly in the North Indian Hindu tradition.

Meerabai was born into family of Merta, Rajasthan, India. She is mentioned in Bhaktamal, confirming that she was widely known and a cherished figure in the Bhakti movement culture by about 1600 CE. Most legends about Meera mention her fearless disregard for social and family conventions, her devotion to Lord Krishna, her treating Krishna as her husband, and she being persecuted by her in-laws for her religious devotion.

She has been the subject of numerous folk tales and hagiographic legends, which are inconsistent or widely different in details. Thousands of devotional poems in passionate praise of Lord Krishna are attributed to Meera in the Indian tradition, but just a few hundred are believed to be authentic by scholars, and the earliest written records suggest that except for two poems, most were written down only in the 18th century.

Many poems attributed to Meera were likely composed later by others who admired Meera. The three different oldest records known as of 2014 that mention Meera all from the 17th century and written within 150 years of Meera’s death, neither mention anything about her childhood or circumstance of her marriage to Bhojraj, nor do they mention that the people who persecuted her were her in laws or from some Rajput royal family.

Nancy Martin-Kershaw states that to the extent Meera was challenged and persecuted religious or social convention were unlikely to have been the cause, rather the likely cause were political chaos and military conflicts between the Rajput kingdom and the Mughal Empire. Some stories state that Meera bai left the kingdom of Mewar and went on pilgrimages. In her last years Meera lived in Dwarka or Vrindavan where legends state she miraculously disappeared by merging in to an idol of Krishna in 1547.

While miracles are contested by scholars for the lack of historical evidence, it is widely acknowledged that Meera dedicated her life to deity Krishna, composing songs of devotion and was one of the most important poet-saint of the Bhakti movement period. These poems are commonly known as bhajans, and are popular across India. Hindu temples, such as in Chittorgarh fort, are dedicated to Mirabai’s memory. Legends about Meera’s life, of contested authenticity, have been the subject of movies, comic strips and other popular literature in modern times.

During the narration, participants showed great curiosity to know about Meerabai. They were amazed to know about the life Meerabai had lived and the bhajans she wrote. They then listened to some of the bhajans that were played during the session.

One of the participant Tejal Bariya says “I liked the story and wonder that the singers have sung the bhajans so well, so, Meerabai who has written those bhajans would have been singing them so beautifully. Though Meerabai faced so many difficulties, she could write such beautiful bhajans.”