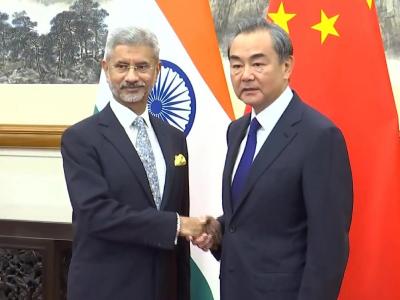 External Affairs Minister (EAM) S Jaishankar met his Chinese counterpart Wang Yi in Beijing on Monday after meeting Chinese Vice-President Wang Qishan. EAM Jaishankar is on a three-day visit to China to co-chair the second meeting of the India-China ‘High-Level Mechanism’ on cultural and people-to-people exchange. Jaishankar arrived in Beijing on Sunday.

He is in China to set the grounds for an informal summit between Chinese President Xi Jinping and Prime Minister Narendra Modi.

This is EAM Jaishankar’s first visit to China after assuming office. During his visit from August 11 to 13, Jaishankar will co-chair the second HLM meeting with his Chinese counterpart Wang Yi to prepare the ground for the second informal summit between Prime Minister Narendra Modi and Chinese President Xi Jinping.

“The HLM reflects the desire on both sides to build greater synergies in the people-to-people ties between the two countries through enhanced exchanges in areas such as tourism, art, films, media, culture and sports,” a statement from the Ministry of External Affairs (MEA) earlier said.

The decision to establish the HLM was taken during the maiden informal summit between Modi and Xi in Wuhan in April last year. The inaugural HLM meeting was held on December 21 last year in New Delhi.

The meeting comes just a few days after Beijing objected to India’s “unilateral actions in Kashmir which it said will “complicate” matters.

Pakistan in its bid to ratchet up the Kashmir matter internationally rushed its Foreign Minister Shah Mahmood Qureshi to Beijing ahead of Jaishankar’s visit to the Chinese capital.

NASA team to survey about critical infrastructure in Vadodara

NASA team to survey about critical infrastructure in Vadodara

Railway unions of Vadodara division raised their protest against the running...