Top
Home > Gujarat > Rulers of Gujarat throughout the history

Rulers of Gujarat throughout the history 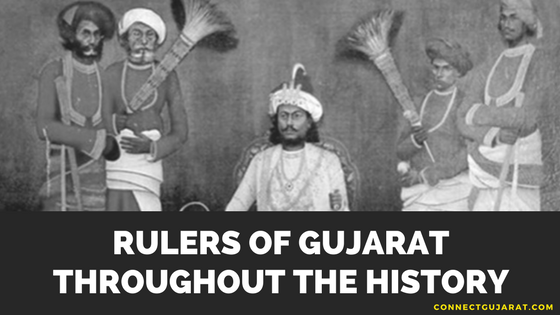 India is a versatile country which has almost everything man would want. It boasts of the great Himalayas, the Thar Desert, a long Coastline (Peninsular country) and the enormous plains and tiny islands. With so much to offer, India has always been a target for invaders, some good and some bad. In fact one of the earliest settlers was the Harappa people who settled in Gujarat and was followed by many other prominent rulers.

Let us take a stroll down the history of rulers who ruled over Gujarat.

Gujarat’s history dates back to the Stone Age which was then followed by the Chalcolithic to the Bronze Age, which is when the Indus Valley Civilization settled.

This period is also known as the Iron Age. During this period the Vedic civilization had started to establish. During this era the rulers were from different dynasties which were followed by the rest. The first rulers were the Janapadas who lasted from 1500 to 600 BCE who were followed by the MahaJanapadas between the 600-300 BCE. During the reign of the MahaJanapadas, there were other smaller kingdoms too which is referred to as Epic India. They were the Abhira Kingdom, Anarta Kingdom, Dwarka Kingdom, Sindhu Kingdom and the Saurashtra Kingdom.

This period is also known as the Classical Period which saw the most prominent ruler that could have ever ruled in India. From 380-321 BCE the Nanda Empire reached greatness under the rule of Dhana Nanda. During the321 BCE the Nanda dynasty saw it fall by the hands of the Mauryan Empire led by Chandragupta Maurya, which lasted till 184 BCE. After which there were other rulers, but couldn’t see the epitome of greatness like the Mauryan King Asoka the Great did. By the end of1243 BCE the Vaghela dynasty had taken over and came to end by 1299after which began a new period.

Also known as the Medieval period and constituted the Early Modern period, this era saw greatness and also major downfalls. It began with the Delhi Sultanate in Gujarat led by AllaunddinKhilji that lasted from 1298-1320. This was followed by the great Mughal Sultanate that was established by the Mughal King Babur. During which Akbar the Great, Babur’s grandson, saw much greatness than his predecessors and successors. After the fall of the Mughal dynasty the Maratha Empire flourished.

This was when the Portuguese India was established followed by the British who went on to rule for a long time. They formed colonies and was known as the Colonial period.

This period is known as the post independence period, which we are still living in. during this period Gujarat had been divided into four parts with no ruler but government administration of India and was later made into an independent state by the year 1960.

Gujarat’s detailed history has made way to various history notebooks. It is of great importance and has played a major role in the formation of our country.