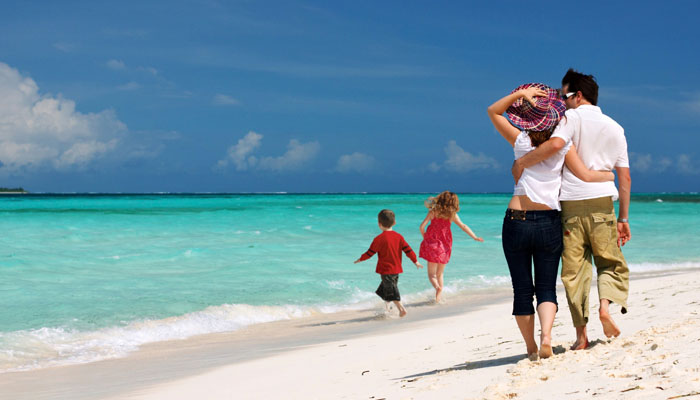 Calangute : The Calangute beach is the largest beach in North Goa and Calangute is  famous for its beaches. Thousands of domestic and international tourists visits here.

The best time to visit here is during Christmas and New Year, during simmer in May, in monsoon season from June to September the sea can be rough and swimming is prohibited . The beach offers water sport activities like parasailing and water skiing, among others. Panaji : Panaji is the capital of Goa and the headquarters of North Goa district. It lies on the banks of the Mandovi River estuary in the Il has de Goa sub-district (taluka). With a population of 114,759 in the metropolitan area, Panjim is Goa’s largest Urban agglomeration, ahead of Margao and Vasco da Gama.

Panjim means “land that never floods”. It has terraced hills, concrete buildings with balconies and red-tiled roofs, churches, and a riverside promenade. There are avenues lined with gulmohar, acacia and other trees. The Baroque Our Lady of the Immacultae Conception Church is located overlooking the main square known as Praça da Igreja. Colourful villas, cobbled streets and interesting buildings help Panjim retain its Portuguese ambiance and culture. Panaji is the first city in India to be built on a planned grid system. Panaji has been selected as one of the hundred Indian cities to be developed as a smart city under PM Narendra modi’s flagship Smart Cities Mission. Palolem Beach is largely unspoiled and is inhabited by both local fishermen and by foreign tourists who live in shacks along the shore or in the main village itself It is about one mile (approximately 1.61 km) long and is crescent-shaped; one can view the entire beach from either end. Both ends of the beach consist of rocks jutting out into the sea. The depth of the sea increases gradually, being shallowest at the northern end of the beach, making it safe for average swimmers, and the currents are not fast. Margao : It is the second largest city by population, and the commercial and cultural capital of the Indian state of Goa. It is the administrative headquarters of Salcete taluka and South Goa district. By road, Margao is located approximately 33 kilometres (21 mi) from the capital Panaji, and 27 kilometres (17 mi) from Vasco da Gama. Baga : It is a seaside town in Bardez, Goa, India. It comes under the jurisdiction of Calangute, which is 2 km south. Baga is known for its popular beach and Baga Creek. It is visited by thousands of tourists annually.

Baga Beach is a popular beach and tourist destination in North Goa. Baga is located at the north end of the contiguous beach stretch that starts from Sinquerim, Candolim, leads to Calangute and then to Baga. The beach contains rows of shacks and fishing boats, and at high tide the beach is narrow. The beach is named after the Baga Creek, which empties into the Arabian Sea at the north end of the beach.

Baga Beach is also famous for water sports such as parasailing and banana rides, and dolphin cruises. In Baga Beach, new parking has been constructed for around 800 cars or more, and there is baga creek bridge which connects northern part like arpora, anjuna etc. Colva : It is a coastal village in Salcete, south Goa, on the west coast of India. Colva Beach stretches for around 2.4 kilometres (1.5 mi), part of a beach consisting of about 25 kilometres (16 mi) of powder white sand, lined along its shore by coconut palms and extending from Bogmalo in the north to Cabo de Rama in the south. Colva is a famous tourist destination, visited for its beaches, budget hotels, guest houses, beach shacks, food stalls, restaurants, pubs and bars. The beaches are constantly monitored by lifeguards, and the swimming areas are flagged for warnings.

The village had significant importance to Portugal and was the retreat for Goa’s high society, who would come to Colvá for their “Mundanca” or change of air. Today the Portuguese area is dotted with houses or villas, including many ruins.

On weekends, huge crowds of tourists, visitors from around the world as well as local Indians, enjoy the sunset and various activities. The beach is particularly busy in October, when hordes of religious pilgrims come and visit Colva Church, called Igreja de Nossa Senhora das Merces, that was founded in 1630 by the Roiz family and rebuilt in the eighteenth century on the village square. The local people have been fishermen since the mid-16th century. They  include  Hindu converts as well as migrants from various Portuguese overseas territories such as Angola, Mozambique, Brazil, etc. as well as Portugal itself.

Vasco da Gama, often shortened to Vasco, is the largest city in the state of Goa on the west coast of India. It is named after the Portuguese explorer Vasco da Gama. It is also the headquarters of the Mormugao taluka. The city lies on the western tip of the Mormugao peninsula, at the mouth of the Zuari River, about 30 kilometres (19 mi) from Panjim, Goa’s capital, and about 5 kilometres (3.1 mi) from Dabolom Airport. The city was founded in 1543 and remained in Portuguese hands until 1961, when Goa ceased to be a Portuguese territory. The 1888 constructed Mormugao port remains a busy shipping route in Asia. Even today it is one of the major ports of independent India and around one-third of India’s ore exports are said to leave from here.

The ship-building area of Goa Shipyard Limited that builds Navy and Coast Guard vessels was also built here in 1957 (during the Portuguese-era). Initially built around the city’s harbor as the barge-repair yard Estaleiros Navais de Goa, the area has now expanded to include more related activities. The Indian Navy also has a conspicuous presence in Mormugao, with its vast campus, and its contested control over the Dabolim Airport enclave.