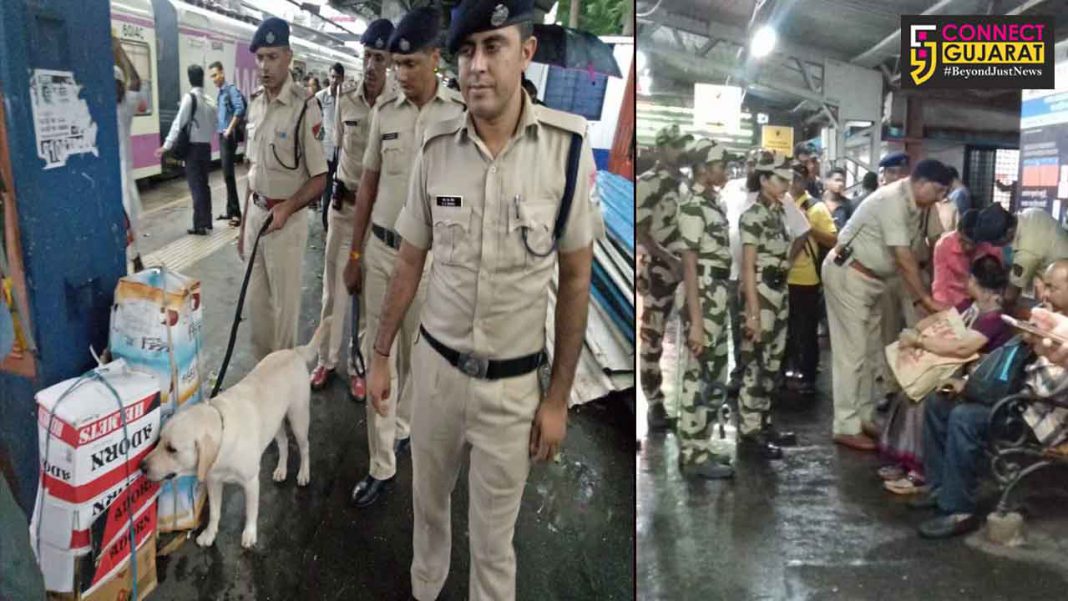 In view of upcoming Independence Day Western Railway has tightened up their security at all the stations to ensure safety of the passengers. The teams with the help of dog squad check the luggage of people, dustbins, waiting rooms and every corner and area of the platforms for any suspicious activities.

According to a press release issued by WR CPRO Ravinder Bhakar, with the impending Independence Day celebrations, the security measures at stations and railway premises have been tightened and further strengthened. Anti sabotage checks are being conducted at all stations along with passenger awareness programmes and sensitization are being conducted for all stakeholders.

Western Railway has already rolled out various security measures, campaigns and activities to provide a safe and comfortable travelling experience to the commuters. They have deployed 552 RPF staff and 220 MSF for crowd management at various stations and FOBs, especially at 18 identified vulnerable points. 22 Segways has been pressed into action for effective real time patrolling at stations. 1533 CCTV cameras have been installed at 107 stations which helps to detect and prevent crimes and also for monitoring cleanliness of stations. Mock drills along with NDRF and Fri Brigade have been organized at major stations to deal with such exigencies and emergencies.

Monsoon Help Desks has been set up at 13 stations for the assistance of Divyang passengers and senior citizens. Western Railway has actively contributed in the various special operations such as “Operation Thunder”, “Operation Thirst”, “Operation Hunt” as desired by Railway Board from time to time. Under “Operation Thunder” 23 touts were arrested in 22 cases with seizure of 1428 Ticket valuing Rs 22,16,786/-. Under “Operation Thirst” total 189 offenders were arrested in 122 cases with seizure of 3872 substandard water bottles worth Rs 58,156/-. Similarly, under “Operation Hunt” 03 trolley bags containing sarees were found from August Kranti Rajdhani Express for which EFT of Rs. 2265/- was charged to the passenger.

Special drives were also initiated against the Fatka Gangs, train bullies, thefts of passenger belongings, dacoity, drugging cases, offences against women and unauthorized travelling in Divyang coaches. 127 passenger trains are escorted by RPF equipped with modern gadgets like Body Worn Cameras, arms and ammunitions and others. Similarly, ladies coaches of suburban trains are escorted by GRP force during night hours. The 24×7 Helpline No. 182 has redressed 6240 calls in the last financial year while in the current year 2677 calls have been redressed till date.

In the last financial year, 733 children and 80 women were rescued and in the current financial year 248 children and 20 women were rescued. The children rescued were reunited with their parents or handed over to NGOs/Police. The RPF personnel have shown their presence of mind and have acted swiftly to save the passengers from falling in the gap of platform and train. In the last year, 41 and in the current year (till date) 10 lives of passengers were saved by alert RPF staff.

The SIB and CIB units have been revamped with modern gadgets which has enhanced the security measures and helps in collection of intelligence regarding the movement of active criminals and suspects within railway premises and organizing raids with the help of the local police to arrest criminals and the recovery of stolen property. The security department is also in the process to procure UAV Drone for monitoring safety and security of Railway Tracks from Churchgate to Borivali section.

WR to run one more special superfast train between Indore and...