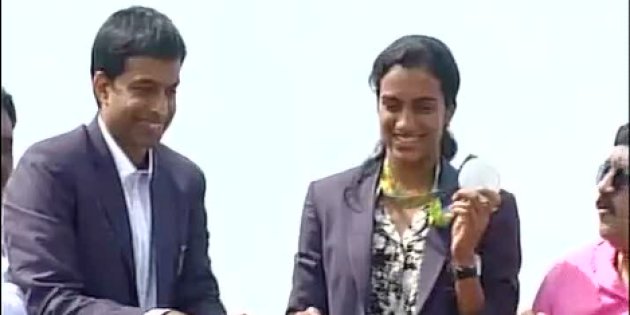 Silver medalist at the Olympic Games in Rio de Janeiro, P. V. Sindhu an Indian badminton who made India proud arrived in Hyderabad to a rousing reception on Monday morning.

P.V.Sindhu became the first Indian woman to bag silver medals in the Olympics. Sindhu along with her coach Pullela Gopichand landed at Rajiv Gandhi International Airport at Shamshabad on the outskirts at around 9.15 am.

The Andhra Pradesh government sent its minister Palle Raghunath Reddy and Vijayawada MP Kesineni Nani, as its representatives to welcome Sindhu. They presented a bouquet and shawl to her on behalf of their government.

Hundreds of sports lovers and school children, who lined up on both sides of the road leading to the airport, cheered her as she came out of the arrival lounge. A large number of cultural troupes brought in by the department of culture of the Telangana government danced and played drums to welcome the star shuttler. The Greater Hyderabad Municipal Corporation team burst crackers to celebrate her grand arrival.

Wearing an indigo blazer and sporting the Olympic silver medal in her neck, 21-year-old Sindhu along with Gopichand and her parents PV Ramana and Vijaya, boarded an open-top double-decker bus, specially brought from Mumbai, which was decorated with flowers and national tricolour.

The cavalcade travelled from Shamshabad to Gachibowli stadium, where she will be accorded state felicitation. A large number of welcome hoardings have been put up by the GHMC from the airport to Gachibowli and other places in the city.

After the official ceremony, Sindhu will be heading to the Pullela Gopichand Badminton Academy (PGDA) in Gachibowli where she will interact with fellow trainees and media.

The Telangana government announced a Rs 5 crore cash reward for the 21-year-old, a 1,000 square yard housing site near the Pullela Gopichand Badminton Academy and a suitable government job if she is willing. It also announced a cash prize of Rs 1 crore for Sindhu’s coach Gopichand.

Andhra government too has offered Sindhu a job and will give her a cash reward of Rs 3 crore and a residential plot in Amravati, its new upcoming capital city.

Sindhu and wrestler Sakshi Malik were the only sportspeople to have won medals for India in the just-concluded Olympics. The United States topped the tally with 121 medals, including 46 gold.