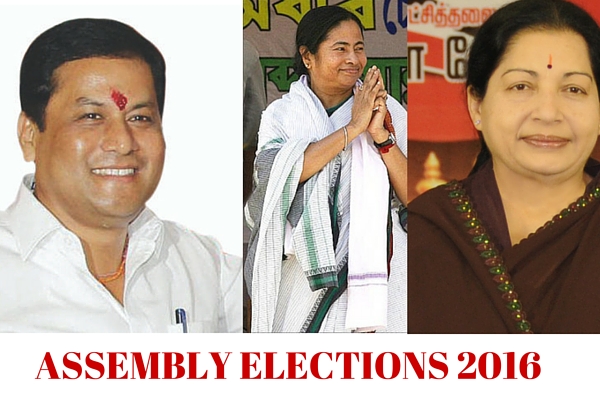 BJP created history today by first ever win at assembly elections in assam. BJP leading with 87 seats. Now confirmed that Sarbananda Sonowal will be the new chief minister of Assam state. From many years congress lead the state but the campaign of BJP this time achieve historic win.

Alliance of LDF victory on 91 seats and UDF got the 47 seats after the results declared. Where BJP open an account with one seat and other got one.

Trunmul Congress leader Mamta Banerjee won the elections with two-third majority by winning about 212 seats. Alliance of congress and left on a second position with 72 seats. 3 BJP candidates made their presence at assembly election.

Jaylalita retain the power again after a long period of 27 years. AIADMK leading with 132 seats, alliance of DMK and congress with 97 and others got 3.

Alliance of DMK and congress won the battle here. Results of puducherry not cleared till the noon. Where now congress alliance led on 17, NRC on 8 , ADMK on 4 and others got 1.