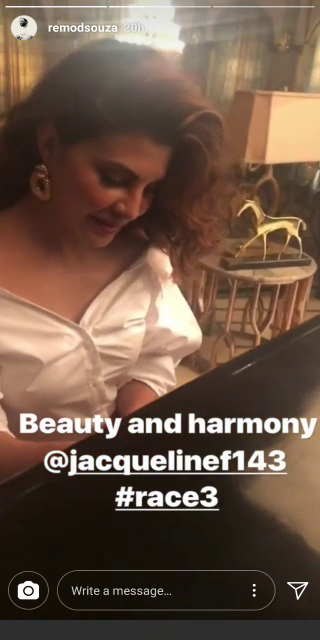 Director of Salman Khan and Jacqueline Fernandez starrer upcoming action flick Race 3 praises the actress for her beauty and harmony as she plays the piano.

The commercial front-runner of Bollywood, Jacqueline Fernandez is a complete package of beauty and talent and knows to win hearts of people around her.

As the action thriller is inching closer to its release, the cast and crew is seen gearing up for the film. Recently, when Remo D’Souza met Jacqueline Fernandez the director couldn’t have enough of the actress and took to Instagram to praise her.

Posting an Instagram story of Jacqueline Fernandez as she played the piano, Remo D’Souza praised the actress saying, “Beauty and Harmony #Race3”

Jacqueline Fernandez will be collaborating with Remo D’Souza for the second time with Race 3 and shares a very warm relationship with the director.

The action thriller brings back the super hit jodi of  2014’s Kick as Salman Khan and Jacqueline Fernandez are seen sharing screen space for the second time. There has been immense anticipation amongst the audience to witness the duo on screen again.

After completing the 55 days action schedule in Abu Dhabi, the cast and crew recently shot for the romantic song between Salman Khan and Jacqueline Fernandez in Sonmarg.