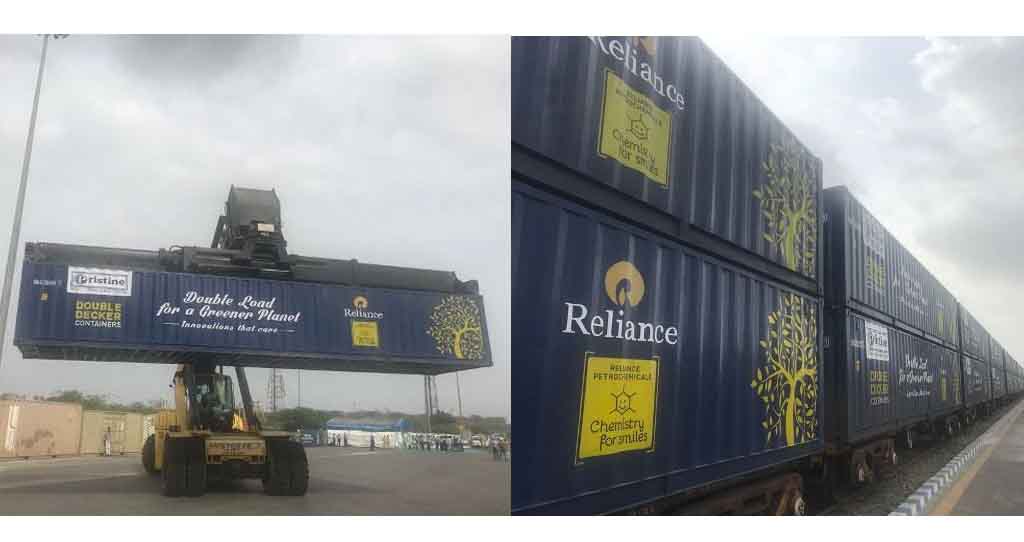 Reliance Industries Ltd. (RIL) become the first company to utilise the Indian Railway’s double-stack dwarf container service. It hired an entire train and loaded 82 double-stake dwarf containers with polymer cargo. The train has successfully completed a maiden run from its rail siding at Kanalus in Jamnagar to Rewari in Haryana.

As per the release Chairman and Managing Director Mukesh Ambani instructed the petrochemicals division team to develop an eco-friendly, cost-effective and sustainable multi-modal transportation options. The team had aggressively explored opportunities in Rail and other transport modes, as the business was totally relied on road transport for domestic transportation of petrochemical products.

Railways is unviable option for RIL as petrochemical products are light weight and if goods are transported through standard containers it resulting in higher dead freight, higher costs, expensive first and last leg transportation and lastly longer transit time.

After exploring through various possibilities the team has zeroed in on the idea of double stack dwarf containers, which can run on existing rail wagons all over India. The concept of double stacking provides scope for higher load capacity, higher Payload and makes transportation of wider range of products such as light-weight polymers, white goods, FMCG products, home-appliances, auto cars viable as compared to standard ISO containers.

To develop the business model RIL collaborated with freight terminal service providers, container designing firms to make a robust business model and the proposal was submitted to Indian Railways officials.

Post successful cost-benefit analysis, the first proposal to practically test this model was made by RIL to Indian Railways in Jan 2016, seeking permission to explore various routes from Jamnagar. After a successful pilot run from Jamnagar to Ludhiana in December 2016, the proposal was officially announced in Rail Vikas Shivir, March 2017, as part of the 55 key strategic initiatives to be implemented by Indian Railways.

The containers are shorter in size and can run on electrified tracks and enable the railways in double-stack movement of cargo and increased the ministry’s revenue.