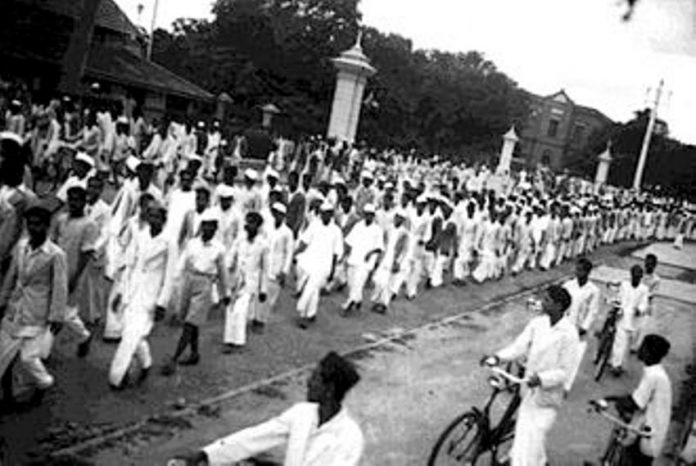 [:en]On 8th August 1942, The Quit India Movement or the India August Movement (August kranti) was launched at the Bombay session of the All-India Congress Committee or more simply by Mohandas Karamchand Gandhi (Mahatma Gandhi) during World War II, demanding an end to British rule of India.

The Cripps Mission had failed and on August 8, 1942 Gandhiji made a call to “Do or Die” in his Quit India speech delivered in Mumbai at the Gowalia Tank Maidan.

Many students paid more attention to Subhas Chandra Bose, who was in exile and supporting the Axis Powers. The only outside support came from the Americans, as President Franklin D. Roosevelt pressured PM Winston Churchill to give in to some of the India demands.

The Quit India campaign was effectively crushed. The British refused to grant immediate Independence, saying it could happen only after the war against Axis power had ended.

Small scale violence took place around the country and the British arrested tens of thousands of leaders, kept them imprisoned until 1945.Gandhiji was arrested on the morning of August 9 and taken to Yervada prison in Pune.

Quit India Movement failed because of heavy handed suppression, week co-ordination and the lack of a clear cut programme of action.

However, the British government realized that India was ungovernable in the long run due to the cost of World War II, and the question for postwar became how to exit gracefully and peacefully.

For several days there was widespread rioting and the British lost control in some parts of the country. Only the strongest measures, including the use of machine guns and aerial bombing restored their rule at the cost of thousands of Indian lives.

It left the British government with no option but to give India freedom. But freedom came at a price: the partition of India.

According to the Acharya Krilani, the congress president at the time of Independence,”  “India could not have achieved its Independence but for the accession of strength which the nation received by the successive struggles started by Gandhiji.”[:]