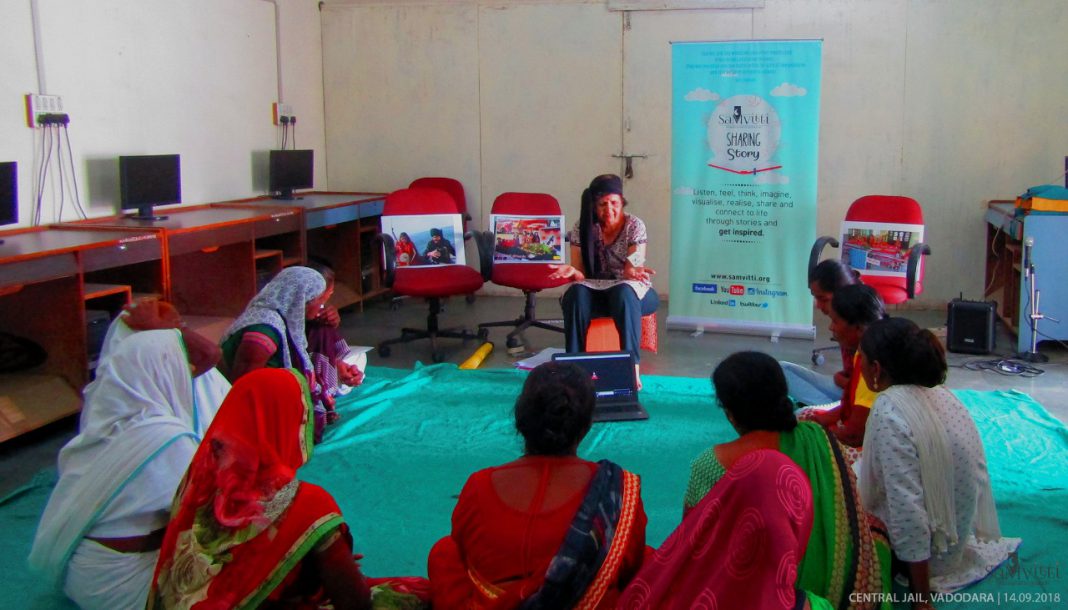 Participants get connected emotionally and shared their life stories.

SaMvitti foundation continues it’s effort to spread awareness in women through real and inspirational stories from our rich literature. Resource person Neela Gupta narrated a real story of Jaisal – Toral to the women inmates of Vadodara central jail with lots of emotions and pride. The story raised a sense of compassion, kindness and forgiveness among the listeners.

The story tells the true tale of a rare association between two Kutchi Rajputs, Jesal, a dacoit and Toral, a queen. In the middle of the fourteenth century there is a phase where people of Kutch got terrified by Jesal’s dacoity. One day his sister-in-law challenged him that if he was brave enough he should prove it by stealing ‘Tori’ – a fine mare belonging to Sansatiyaji.

Jesal took-up the challenge and came to steal the mare at night while there were devotional songs being sung at Sansatiyaji’s place. On seeing an unknown person in the stable, Tori got startled and ran-off uprooting the nail to which she was tied. However Tori was caught by the stable-hand and brought back.

He brought him inside his home and served him with kindness and offered him hospitality. Next morning, Sansatiyaji asked Jesal for a wish. Jesal asked for Toral, not knowing that the queen too had the same name. Sansatiyaji, a devout ‘daani’ (donor) known for never to disappoint anyone, gave him three Torals – his queen, the mare and a sword by that name.

Queen Toral went with Jesal without any objection as she had understood that if a person (Jesal) with so much grit and determination be shown the right path, he can be transformed and turned towards divinity of love and affection.

On their way to Kutch, there came a fierce storm and Jesal realized that he would not survive the storm but Toral assured him that she can save him if he repented for his past Karmas, sought forgiveness and turned towards God. She explained to him the truth of life in that moment of crisis.

Following her advice Jesal did the needful. He asked for forgiveness and took a vow to turn towards God. The storm subsided and they were saved. That incident transformed Jesal completely. He became an ardent devotee and spent the rest of his life singing the glory of God and spreading the message of universal love and compassion. Today their Samadhi shrine is worshipped with much faith and love in Anjar, Kutch. Toral is remembered in gujarati literature as a devotional poet who composed and sang devotional songs.

The participants on listening the true story connected with it deeply and understood the message of divine love and oneness. The story also kindled a sense of compassion, love and kindness for living a peaceful life and also the power of forgiveness and divine love which can transform their lives.

During the session a police-women also got involved and interacted with the resource person Neela Gupta and the participants. The Participants get connected  to the story to such an extent that they cried and shared their life stories.