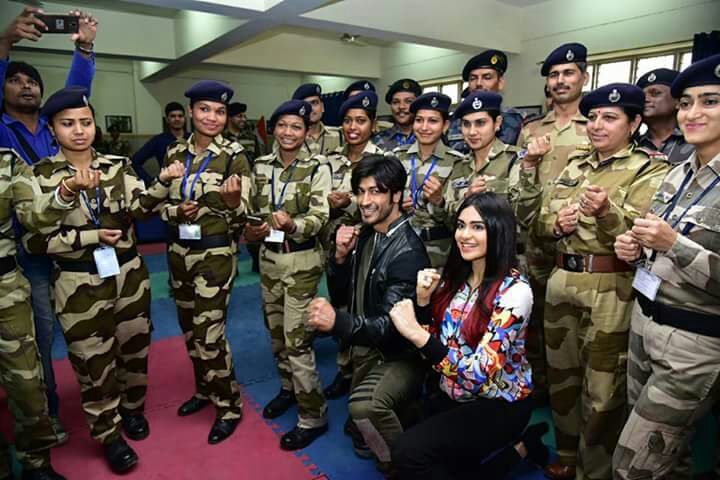 Team ‘Commando 2’ had an engaging meeting with the Central Industrial Security Force (C.I.S.F.) commandos at an event in Delhi yesterday on Wednesday. The lead actors Vidyut Jammwal and Adah Sharma were accompanied by producer Vipul Amrutlal Shah and director Deven Bhojani at the event.

The team was given a warm welcome by the officers, who then took them to their training area and demonstrated some defense techniques.

Vidyut and Adah were quite intrigued by this and were eager to learn some of the techniques. The real-life commandos happily obliged and taught them some moves on how to defend.


The ‘Commando 2’ team showed them the trailer of their film, which the officers really liked, and praised Vidyut for his action sequences and for his discipline in martial arts.

Vidyut then took the fun element a notch higher by challenging the officers to doing push-ups with him, and they had an exciting round of push-ups in an environment full of smiles and laughter.  The team spoke about their film and gave them interesting insights into shooting some of the action stunts, and ending the event with a round of pictures with the officers.

The film has been generating positive buzz among the audience for its thrilling trailer and its songs, and also stars Esha Gupta and Freddy Daruwala in pivotal roles. Vidyut Jammwal is back once again as Karanvir Singh Dogra, an international spy all set to eradicate black money.

‘Commando 2’ is presented by Reliance Entertainment and Jayantilal Gada (PEN India Ltd.) in association with Sunshine Pictures Pvt. Ltd., and is slated to release on 3rd March, 2017.