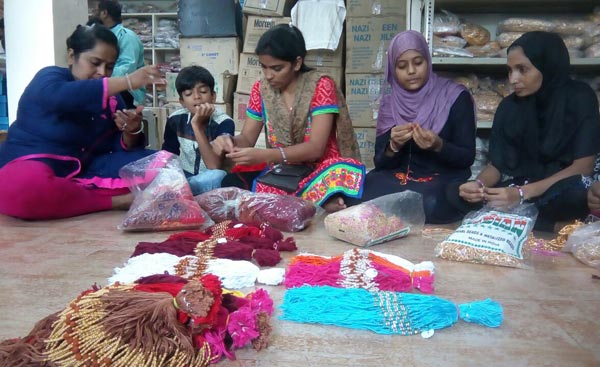 Rakshabandhan the festival of love and bonding between brother and sister is celebrating in the whole country on Monday today. The sisters tied the Raksha Sutra on the wrists of their brothers and pray for their well being. However less of the people know that the beautiful Rakhis that we wear are made by needy Hindu Muslim girls in Vadodara. They prepare Rakhis for the six months in the year and help their families. With this they pay their school and tution fees and helped their families.

Babubhai Rakhdiwala from Wadi Mogalwada area is into Rakhi business and the only business he is doing for years. He sends rakhis not only to different parts of city and state but to every part of the country. The rakhis were prepared by the Hindu and Muslim girls from the city which the Hindi sisters tied on the wrists of their brothers.

Rakshabandhan festival source of income for needy girls
1 of 9

Studying in 11 standard one girl said that she is preparing rakhis for the last two years after bring the materials from Babubhai Rakhdiwala. She earn 5 to 6 thousand per month by preparing Rakhis and not only pay her school and tution fees but also helped her family.

Another girl said that after the death of her husband it was difficult for her to both ends meet. However she started preparing Rakhis and working day and night for six months in a year she earned enough money to support her family. She earned 8 to 10,000 per month with the Rakhi preparation and her children also helped her in the work.

Babubhai Rakhdiwala said that he is into Rakhi business for years and their business like Gruh Udyog. They bring various materials from the different cities and give it to the girls and females of the needy families who want to earn their living. They started preparing Rakhis six months before the festival and it helps around 1500 Hindu Muslim families to earn their living and support their families.