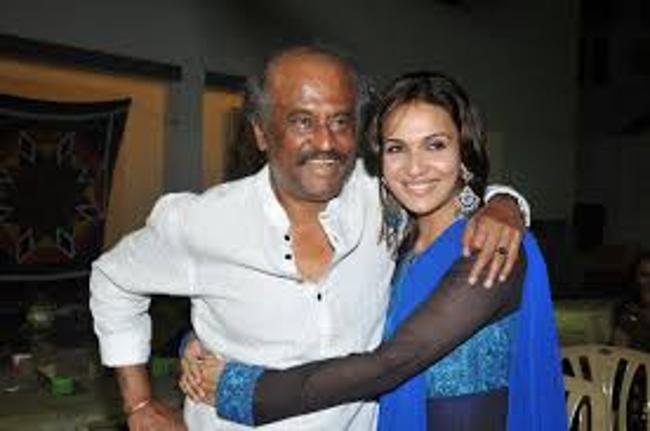 He worked as a bus conductor. And worked his way to be idolised in the country as a megastar. Actor Rajinikanth, who turned 65 on Monday, has not forgotten his roots and that helps him to be as down-to-earth as he is, says his daughter Soundarya.

Excerpts from the interview:

Q. How does Rajinikanthji remain so down-to-earth?

He is a very simple human being. He never forgot where he came from. As his children, my sister Aishwarya and I learnt this from him — to never forget our roots. With our dad, there are no two faces. What you see is what he is. Whether it’s a fan or a producer, he treats them all the same. He has been down to earth all his life. He will never change. We, as his children, try to emulate that trait of our dad.

Q. Rajinikanthji’s last release “Kabali” broke a box office records. Was there some anxiety in the family about it? Critics and fans were surprised by the subtle but sudden sartorial and image changes in “Kabali”.

I think what attracted by dad to the role was the whole idea of playing a don in Malaysia. The changes that you’re talking about came about with the role. He was a little apprehensive about the part because he had to play someone close to his age. Also, there was a message on the downtrodden. He also had concerns about the lack of comedy element in the script. But by God’s grace, it’s all turned out really well. The bottom-line is, my father liked the director Ranjith and he liked the subject that Ranjith came up with. They instinctively took to one another.

Q. Was there a sense of dismay when Rajinikanthji’s last two films didn’t do well?

Of course it makes a difference to the artiste when his film doesn’t do well. Just like a successful film makes a difference to everyone concerned, a failure affects everyone too. But my Dad is not the kind to mope around wondering what went wrong. After he completes a film, he moves on, whether it is a hit or a flop. He is always wondering what to do next. Even after the response to the last two films, he moved on quickly. Sure, there was minor dip in the graph. But these things happen in every artiste’s life.

Q. There are serious questions being asked about Rajinikanthji’s health. Would you clarify?

I’d like to say once and for all that my dad is in fine health. But for the first time in a very long time, he was shooting two back-to-back films — “Kabali” and “2.0”. As you know, “2.0” is a sci-fi film with lots of costumes and action scenes. Dad was shooting round-the-clock. “Kabali” required a lot of night shooting. And my dad doesn’t normally shoot at nights.

The physical strain was getting to be too much for him. So we whisked him away for a holiday.

Q. Wasn’t it odd that he wasn’t here for the release of “Kabali”?

It wasn’t planned that way. It just happened. My sister and I took him away because he needed to be on his own, away from the limelight and needed to rest and get his energy levels up.

Q. Would we see him play more socially relevant roles?

My dad never made any career plans. He goes by the subject. As of now he is only doing “2.0”.

Q. Why do we only get to see Rajinikanthji in dubbed films? Why hasn’t he done a Hindi film for so long?

The “Robot” sequel will have an independent Hindi edition. The language is a cultural mindset. The language should not make any difference. Having said that, I must admit dad has not done a Hindi film in a long time. If he gets the right project in Hindi, he will do it. At the end of the day, he is aware of what his fans want from him. And he works in the films that he feels will please his fans.

Q. Do you think Rajinikanthji needs to take it easy?

He has cut down on action scenes. Before he did “Kabali” and “2:0” simultaneously, he was doing only one film at a time. The family is very conscious of his health. We are making sure he doesn’t strain himself. After “2:0”, he won’t do two films at the same time. We are aware that he is as precious to his fans as to his family.