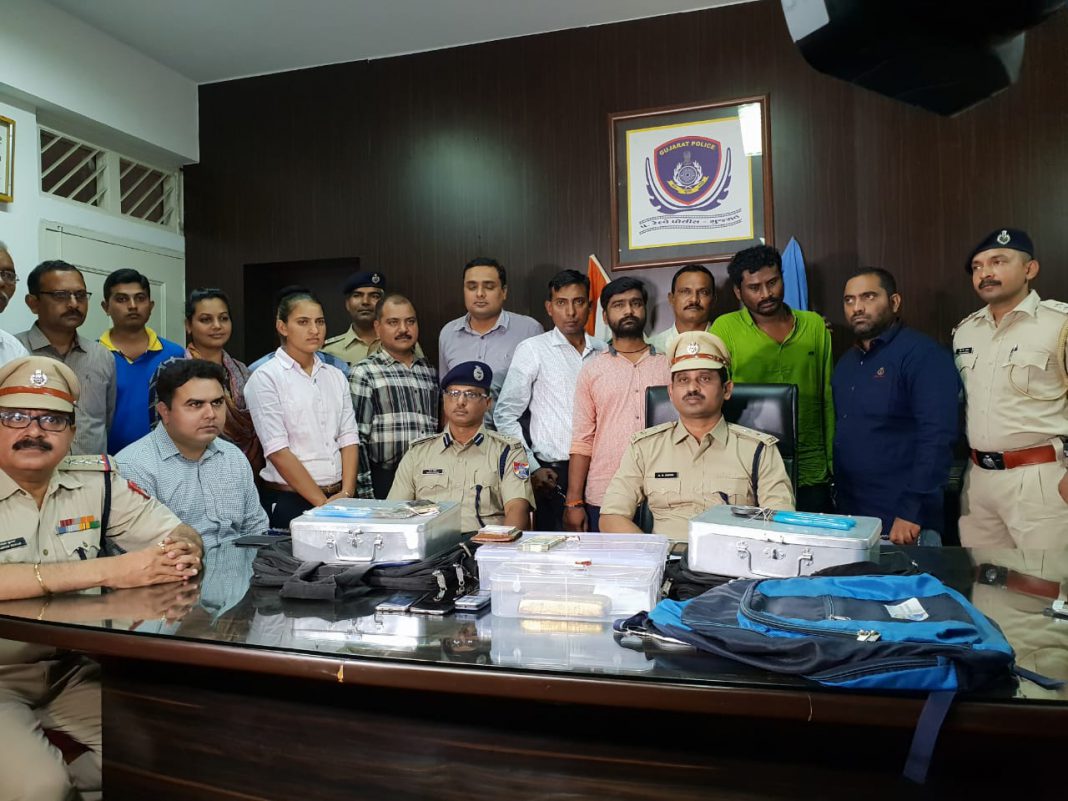 26 seconds CDR proved to be the breakthrough

Vadodara and Surat railway crime branch teams in a joint operation busted a gang of robbers involved in robbery of jewellery on board Ahmedabad Puri express. 24 seconds call by the accused help the investigating teams to zero in and detect the crime and arrested three of the accused. The teams also recovered 1cr75lakh worth jewellery and cash from them. The hunt is on to trace the other two involved in the crime.

As per the case details the complainant was travelling from Raipur to Ahmedabad on board Ahmedabad Puri express on 12th July 2018 in a Second AC coach. After crossing Dondaicha station the complainant tied the two bags having clothes and two black Rexene bags having 6.927kg of jewellery inside with chains under their seats. 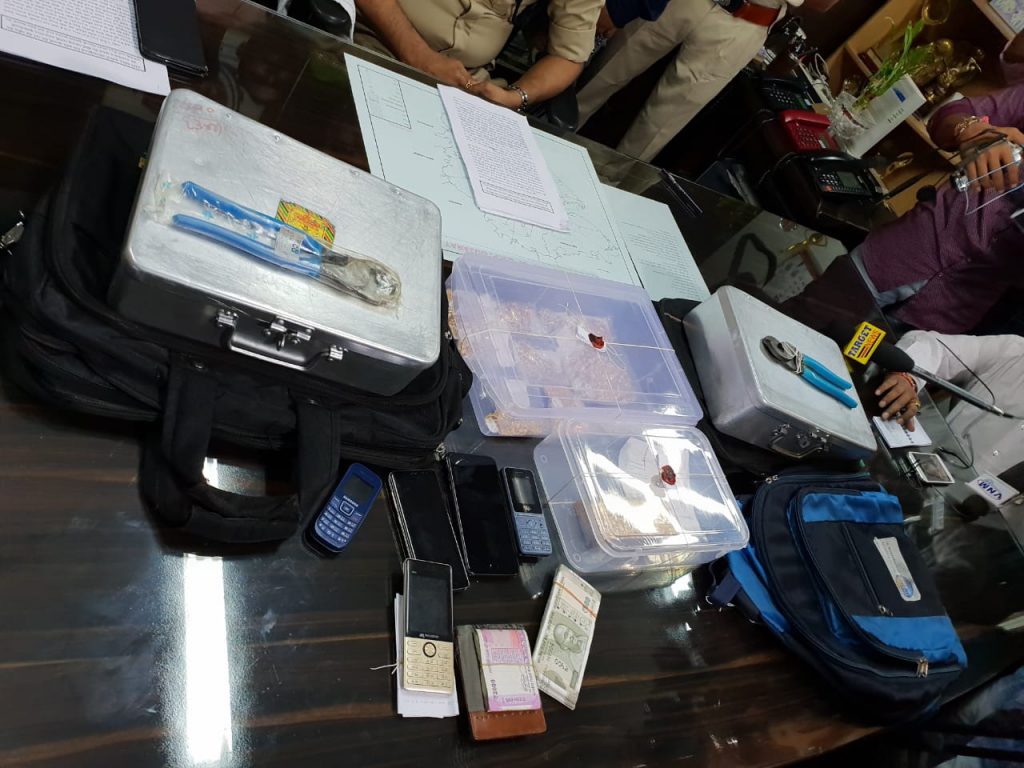 Meanwhile at Anand station he woke up and shocked to see the two Aluminium boxes missing from under the seat after cutting the chains. The jewellery bags are kept inside the Aluminium boxes and the accused stole the same worth 2.13cr from there.

Based on the complaint the teams started accessing CCTV footage of the complainant and his associate move around the Soni Bazaar in Raipur and also identified a person talking and kept a watch on them. Further investigating on base of the CDR the teams able to find the suspicious person and arrested Subhash Jadhav 45 from Usmanabaad Maharashtra on 7th August. After primary interrogation he revealed the names of Pandit Arjun Pawar, Babusha, Sanjay Jadhav for involved in the robbery.

Afterwards the teams kept a watch at various places in Maharashtra to trace the wanted accused and successfully arrested the main conspirator Pandit Arjun Pawar and his driver friend Ramesh Jadhav and recovered mobile phones, cash, I cards, ATM cards papers and other things. Ramesh was arrested for helping the main accused to fled and hide at various places after the crime.

Police recovered jewellery worth 1.69cr from the bungalow of Pandit Arjun Pawar. The team in total recovered 1.76cr worth jewellery, cash, car and other items from them. The hunt is on to trace the other two accused involved in the crime. 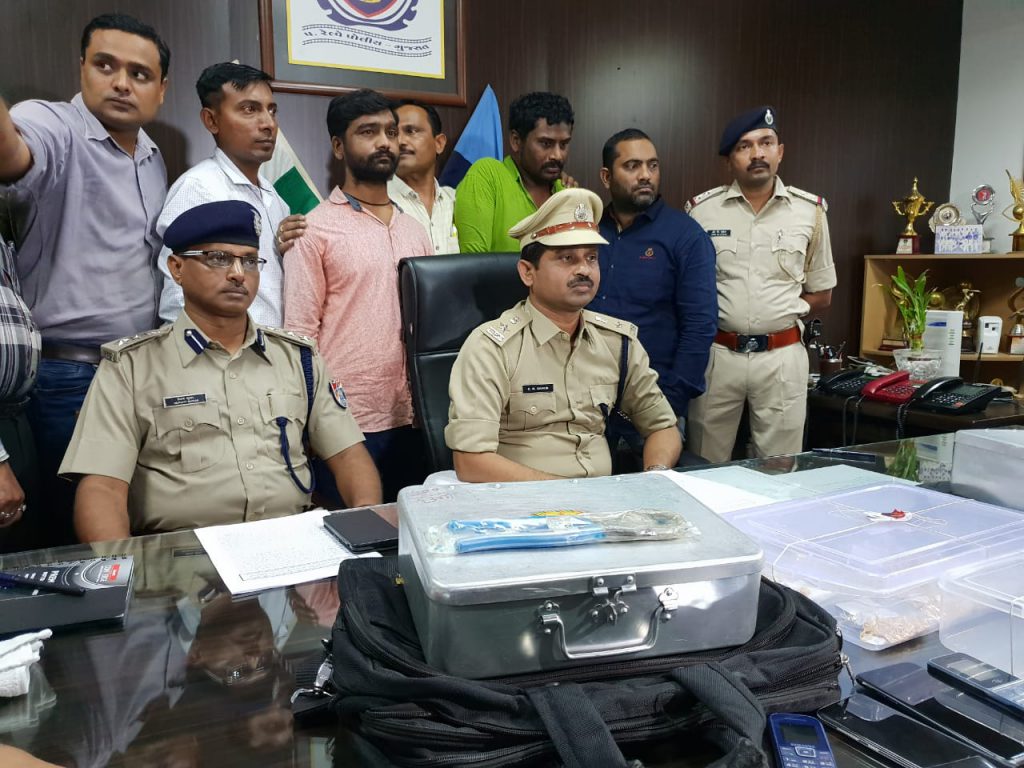 “The MO of the accused are to target the Soni’s frequently travelled in trains and then decamp with their ornaments bags. In this case the accused first done reiki on the complainant and then board the train without ticket. After the complainant dozed off they cut the chain and fled with the jewellery bags. Our teams based on deep technical surveillance busted the gang and managed to arrest the three including the main conspirator. The hunt is on to nab the remaining two accused,” said K.N Damor SP Western Railway.