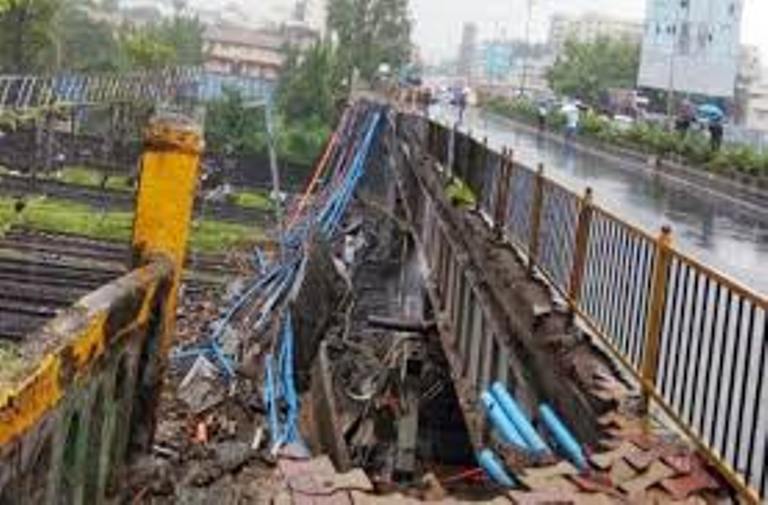 Some trains cancelled and short terminated

Rail traffic badly affected after BMC's Road Over Bridge collapsed on rly tracks near Andheri Station of Western Rly, towards Vile Parle on South end. at about 7.30 am on Tuesday.

Due to this traffic of W.Rly is held up on all lines between Goregaon & Bandra stns, while local trains are running beyond Goregaon & between Bandra & Churchgate. OHE has been damaged and senior Rly Officers alongwith suitable staff rushed to the site and all possible efforts are being ensured to restore the traffic on affected section at the earliest.

Due to path way bridge for pedestrians fallen down at Andheri stn, 5 persons hv been injured in which 1 is critical & 4 persons had grievous injuries. All are admitted in nearby Cooper Hospital. A special medical team of Rly doctors are taking due care of all of them. Commissioner of Rail Safety of Western Circle will hold an inquiry of this incident.

Due to traffic disruption, some trains are cancelled & short terminated as per given list. Arrangements of 27 special buses are made between borivali and bandra stations for clearance of stranded passengers.

Due to the incident no trains are running between Goregaon-Bandra section of WRly. Some mail express trains have been cancelled & rescheduled, therefore special arrangements for refund are made at various stations. However, as a special case, WR commuters are permitted to travel on alternative routes of CRly.

HelpLine numbers r as under :-