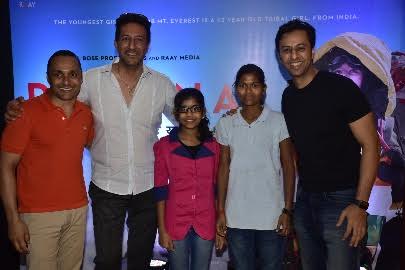 The awe inspiring trailer of Rahul Bose’s Poorna will sure leave you with goosebumps. Poorna is a biopic based on the life of Poorna Malavath, a 13 year old Indian girl who created History by turning the worlds youngest person to scale the Mount Everest on May 25th, 2014.

The film brings to celluloid the exceptional life journey of Poorna, which will leave you touched and motivated.
The event was addressed by Rahul Bose who shared the journey of making one of the most inspiring films of 2017. The film maker spoke at length about the conception of the idea, the making of Poorna and its ability to draw audience to the theatres.

The film maker also had in company, the real Poorna Malavath, who’s words inspired all those present in the audience. Poorna spoke about her struggles and how she strived towards achieving an impossible dream with much dedication and perseverance.

The highly inspiration interaction was led by an equally powerpacked trailer of the film, which had the audience left with goosebumps. The makers of Poorna have been leaving no stone unturned to promote the untold story of one of India’s youngest achievers to have brought worldwide recognition and glory to the country.

In sync with the film’s subject, the makers of the film also launched Poorna’s first look poster on the Mount Kilimanjaro Summit!

This was also the first time that a film’s poster will be launched atop a mountain, that too on the peak of Mount Kilimanjaro, the highest peak of the continent of Africa. It was none other than Poorna herself who undertook the expedition to scale another height to unfurl the longest Indian Flag along with the poster to her biopic. Further, film maker Rahul Bose also hosted a special screening of the film for the Indian cricket team, who were left inspired and motivated on watching the story of Poorna.

Indian cricketer Virat Kohli took to Twitter to express, “Last night we saw @PoornaTheFilm, and must I say its an inspirational story for everyone. Hats off!!”

The movie is shot on high altitude which apart from being an insight into the life of the youngest girl who scaled Mount Everest ,also promises to be a visual exquisite.