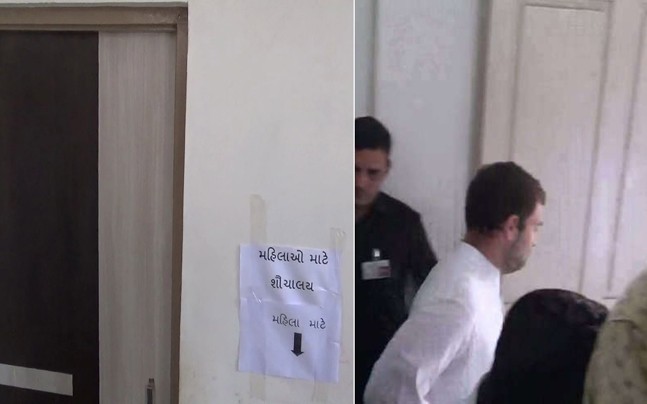 Congress vice-president Rahul Gandhi is working hard on PM Narendra Modi's home state Gujarat for upcoming elections. However, on Wednesday a small incident happened with Rahul Gandhi during the Chota Udaipur assembly. In the coming days, Rahul Gandhi himself will laugh on this incident. The reason for this incident is that he can’t read in Gujarati.

Rahul Gandhi was holding public meetings in Chota Udaipur and was interacting with the youth in Darbar Hall of the Communication program. Meanwhile, he went to the ladies toilet instead of the Gents toilet. This matter became a bit ridiculous.

In this toilet, a paper was written in Gujarati language, Ladies Toilet. There was no picture on the toilet door. For this reason, Rahul could not understand Gujarati and went to the Ladies toilet.

After this, Rahul Gandhi's SPG removed the people from there. Though Rahul Gandhi was seen coming out of the women's toilet, all the people were laughing.

Earlier, addressing a huge gathering in Limkhera town of Dahod district of central Gujarat, Rahul said, "Modiji realized that the Demonetization was not completely destroyed to people and small businessmen. So he decided to bring the goods and services tax (GST).