A.R. Rahman in Hiroshima with band

A.R. Rahman is currently in the Japanese city of Hiroshima along with his band.

Rahman took to Facebook on Sunday to share a photograph in which he can be seen posing alongside two women.

“On the way to Hiroshima with my band,” Rahman wrote alongside the image. 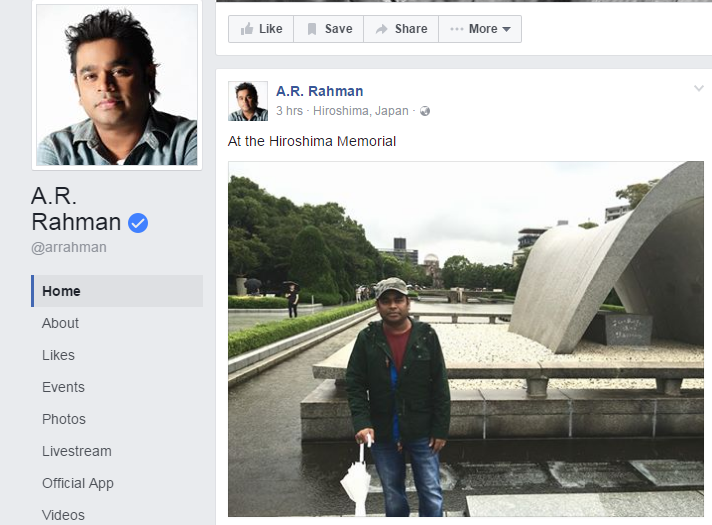 According to a Facebook user, Rahman is in the city for a performance.

“On behalf of India, your concert in Hiroshima will spread the message of peace and world brotherhood in Japan, which had been affected by the worst devastation of the atomic World War II,” the user commented on Rahman’s post.

Rahman also posted another photograph in which he can be seen posing in front of Hiroshima Peace Memorial.

He captioned it: “At the Hiroshima Memorial”.

He started his journey by composing scores for documentaries and TV shows before he got his first movie break with 1992 release “Roja”. Since then, he has composed soul-rendering music in films like “Rangeela”, “Taal”, “Dil Se”, “Jodhaa Akbar”, “Swades”, “Rang De Basanti”, “Rockstar”, “Jab Tak Hai Jaan” and “Raanjhanaa”.