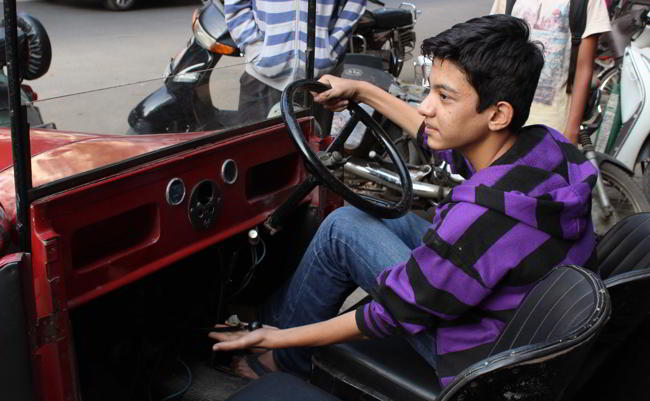 Qazi family in Vadodara has a unique collection of vintage cars and the whole family is taking care of them just like a member of their family. Such is the emotional bond with the vintage beauties that they recently denied a offer of 6 lakhs for a 1922 England made Austino 7 car which is the only one they claimed is with them in Gujarat.

93 years old Shehar Qazi Muzaffar Qazi bought the Austino 7 in 1959 for mere 900 rupees from a businessman from Rajpipla.

93 year old Shehar Qazi Muzaffar Ahmed Qazi has a passion of vintage cars and with Austino 7 he also has Morris 36 and DKW 37 models in his collection. He purchased the Morris 36 in exchange and DKW 37 for 2500 rupees. He said for the Austin 7 a Thakor from Saurashtra offered him 6 lakhs for the vintage beauty but he denied as it’s his prized possession and he never sell it to anyone till he live and believe his family will do the same after him.

Studied B.A. from Mumbai University and worked as law enforcement officer during the Gaekwadi rule Muzaffar Qazi said that the Austino 7 model is the only one left in Gujarat. He further said that the 1922 model England made Austin 7 came to India in the year 1926 and claimed to be the only one in Gujarat and that too with them. The car is still in running condition and the Qazi family kept it like a family member with them.

The family members said that they drove the car last on 31st December and they are proud to have the vintage beauty with them. They said there are offers for rent the car to marriage ceremonies and film shootings but they refused as it’s vintage and to be maintained very carefully.

Austino 7 is also known as convertable and four sitter car.

A button next to the steering is used to start the engine and to race another button is on the steering. Gear box, foot brake and hand brake facilities are in the car.

The volume of the tyre is same as the recent bullet motorcycle so the car is having the tyre of Bullet.

The Qazi family members Asad Qazi and Faiz Qazi said that Austino 7 is their favorite car and they taking care of it just like a family member. We start and drive the car once in a day and feel proud to have the vintage beauty with us. They said they are taking care of the car for the whole life and this is more prescious then the luxurious cars of today.