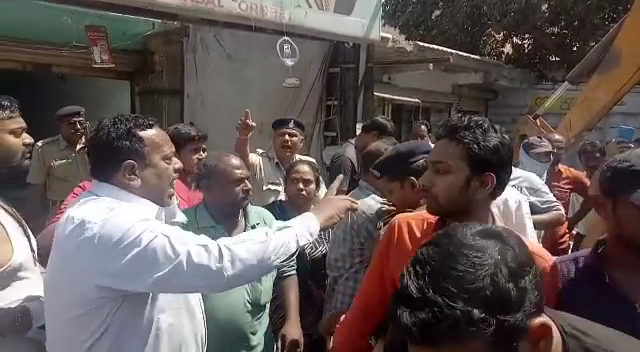 Local traders in Vadodara attacked the police team including the PSI from Gorwa police station present there for security arrangement in demolition work. The incident happened after the VMSS demolition team arrived to demolish the shops in dilapidated Amul apartment in Subhapura area of the city. As the people attacked the PSI he took out his service revolver in defence and pointed to the crowd which spread the crowd.

As per the details the Nirbhay department of VMSS team served demolition notice to the dilapidated Amul apartment. However many shops are still occupied and the team reached there on Monday to demolish the remaining ones.

Since morning the situation was heated up there and as a result the traders attacked the PSI on duty there for the security arrangement. As 10 to 15 people attacked the PSI he took out his service revolver and pointed on them in self defence.

The whole incident send fear among the others after the PSI point his revolver on the crowd. However after the incident the police use their power and that allowed the VMSS team to continue their demolition of the remaining shops in the apartment.