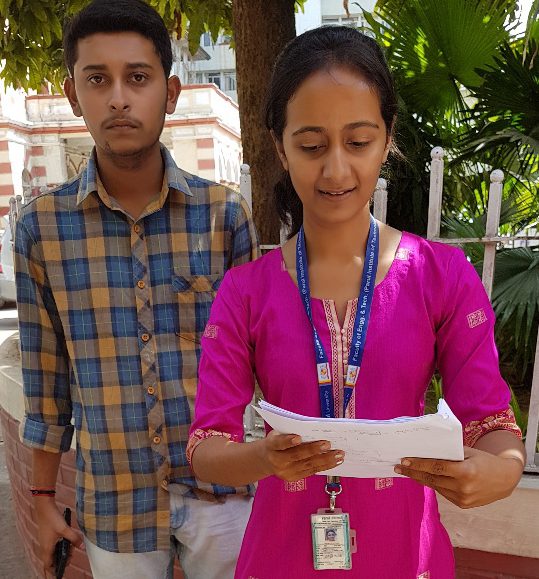 Yet another matter of Parul University came to light on Saturday when a assistant professor in Mechanical department of the university accused the administration for exploitation. Umangi Pathak a employee of the Parul University put allegations on the college administration for deducting money from their salaries every month in the name of donation. They were given the reciepts in the name of Parul Arogya Seva Mandal which shows the amount deducted from their salaries. The assistant professor on Saturday give a memorandum to the collector regarding the matter and request him to intervene. For the past six to seven months the Parul University situated in Waghodia is in the limelight for the wrong reasons. Once again an assistant professor working with the university put allegations on the administration about economical exploitation in the name of donations. “I am working as an assistant professor in Mechanical department of Parul University and in the start of every month the administration take blank cheques from the faculties which they use to withdraw money from their salary accounts. The amount range from 2000 to 20,000 and the receipts were given in the name of Parul Arogya Seva Mandal as a donation amount. The whole this thing is to white their black money,” said Umangi Pathak. She also put allegations on the college administration for collecting hefty fees from the students in order to fill their seats before the government colleges. She also said that the fees amount was taken in the name of donating it to Parul Arogya Seva Mandal. “The university is collecting hefty fees from the students more than the government colleges for engineering charge like the GTU. The private colleges like the Parul Uniiversity are charging hefty fees against the guidelines and that is why I thought to raise my voice against such corruption,” said Pathak. Umangi Pathak gives an application in this regard to the IT department about more then a month ago and on Saturday after no response from them she gives a application to the collector of Vadodara. “I joined there on 15thJune 2015 and for the last one and half year they took out about 3lakhs 72,000 from my salary. After no response from the IT department I give the application to the collector as well as the state and central education departments and Prime Minister Narendra Modi who is against such corruptions in education system. I know I can be thrown out from the college after this but I want to send message to the parents to choose a college for good education not by infrastructure which the Parul University boasts of,” said Pathak.

Umangi added that earlier a faculty was also thrown out of the university for raising his voice. She added that the only aim of her to came out is to show the real picture of private colleges who are turning the education into business. She said the government should check and strictly control such practices in there and also increase the number of government colleges in the state to stop such things.