To celebrate the life of His Holiness Pramukh Swami Maharaj, over 90 BAPS temples across the United States held tribute assemblies.

In conjunction with these events, President Barack Obama shared a personal message for BAPS members and well-wishers. In honoring the legacy of Pramukh Swami Maharaj, President Obama offered this message: “Blessed with the kind of wisdom and faith that transcended boundaries, Pramukh Swami Maharaj spent his life using the power of his inner goodness to lift others up.”

President Obama lauded the late spiritual leader of the BAPS Swaminarayan Sanstha by noting that Pramukh Swami Maharaj “was a trusted ear and revered voice for countless people, and the lessons of his humility stirred not only the hearts of his followers, but also of men and women across the globe who were fortunate enough to have crossed his path.”

“By paying tribute to a man who believed in the worth of all people and dedicated himself to serving those in need, we are reminded of the ways our common humanity will always bind us together,” he added. 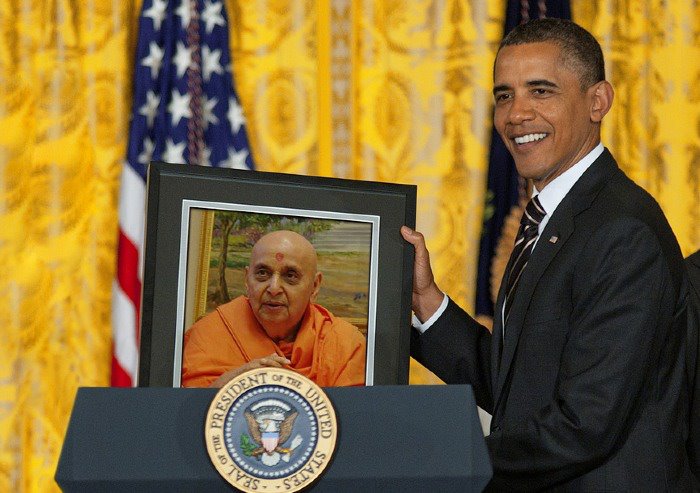 “May the memory of His Holiness Pramukh Swami Maharaj continue to guide you, and may his legacy give us the courage to be our best selves,” concluded the President’s personal message to the BAPS tribute assemblies being held throughout the United States.

The President’s personal letter containing his tribute to His Holiness Pramukh Swami Maharaj was shared with these tribute assemblies across the United States.

He had been suffering from a chest infection in his last days from which he was gradually recovering. However, due to his longstanding heart problems, he died on 13 August 2016, at 6 pm at the BAPS Swaminarayan Mandir, Salangpur, Botad district, Gujarat, India.

On 20 July 2012, Pramukh Swami had declared in the presence of senior Swamis that Mahant Swami Maharaj would succeed him as the sixth guru and spiritual head of BAPS Swaminarayan Sanstha.