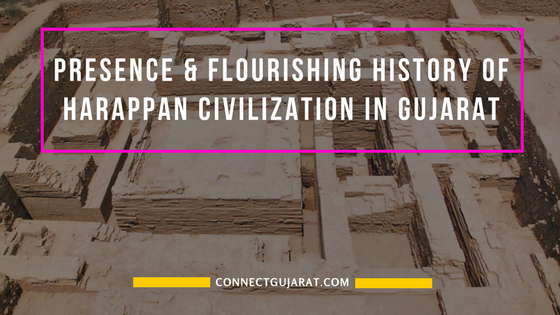 The state of Gujarat has a flourishing past that has been under different rulers at different periods making it what today is. Gujarat is known to have a rich cultural heritage that has been evolving over the years. One of the first settlements in Gujarat has been of the Harappan Civilization. It helped Gujarat emulate into a civilized and flourishing place of trade, culture, spirituality and economically capable. The effect is still prevailing and has given Gujarat a place in the History books of India. Around the 2500 BC, the Harappan people had begun to infiltrate into the Kutch and later settled down, molding Gujarat according to it civilized culture.

The City Of Dholavira

Locally known as Kotada in the Khadir Island of Kutch, the city of Dholavira stoodout from the rest of the Harappan sites for its magnificent planning and beautiful use of space. It had gateways, open spaces, wells, efficient street system, built-up areas and intricate housing with remarkable accurate measures. The city was divided into two parts, the middle town,and the lower town.

The City of Lothal

This city lays in the Ahmadabad District under the revenue jurisdiction of Sarajwala Village in DholkaTaluka. The meaning of the name literally means ’the city of the dead.’ The Harappans were mainly eyeful about this city for its richness in cotton and rice growing hinterland. Every city of Harappa had two parts, the citadel or Acropolis for the people in power and the lower town for the common man. Even so both the sectors enjoyed great amenities and an efficient commercial sector among others. This city was a center for trading copper and bronze materials which helped gain revenue for the rulers.

Around the year 2300 BC, the Harappansmade settlements in this city and had built a fortified citadel and residential annex. This city was known for its pottery culture which had Indus alphabets painted on it. It produced chest blades and copper objects, other than the clay artifact which made way to account for the existence of their daily lives in today’s world. They had reared animals like camels, horse, elephants, etc. giving us an insight into them being civilized people apart from the intricate housing, drainage system,and trade.

These three cities of Gujarat housed the Indus Valley Civilization (Harappan) and molded Gujarat from ruins to restoring it to a civilized place for the existence of humans.  The settlements of the Harappan people were just the beginning of Gujarat which has led to many reforms since then, making it what it is today.