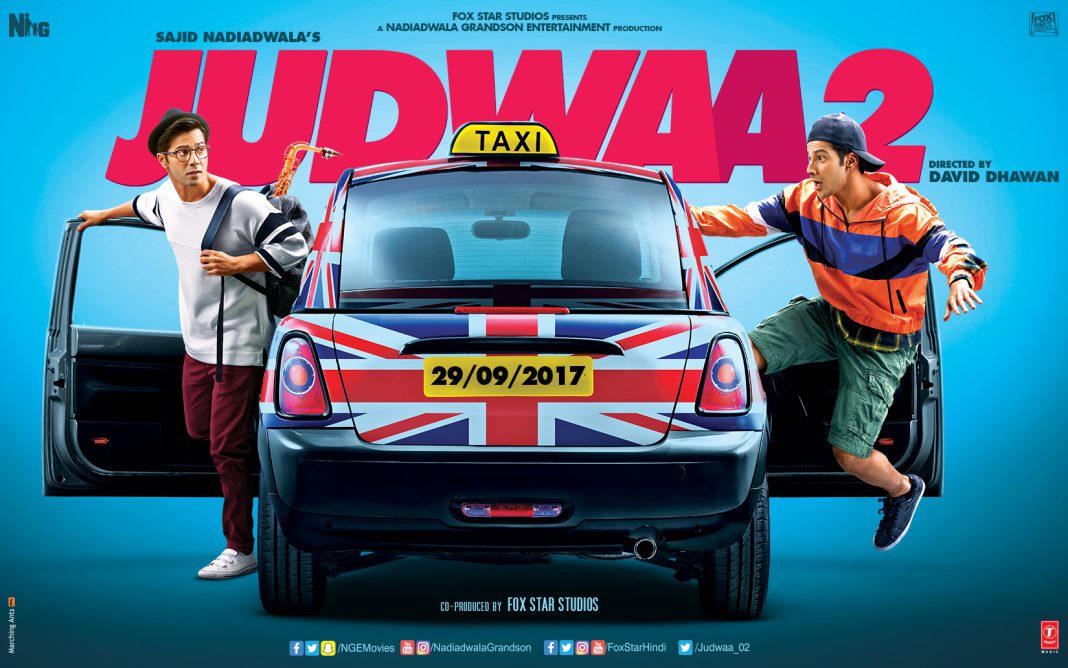 The makers of Judwaa 2 have treated the audience with the second poster that also reveals the date of the trailer launch which is all set to release on the 21st of August 2017 and has intrigued the audience.

This second poster of Judwaa 2 is bright and vibrant, it shows a clueless looking Prem exiting a taxi while mischievous Raja enters the same cab. This poster recreates the iconic twin brothers from the original. Prem has donned a nerdy look with a bag and a pair of spectacles while Raja is seen in all trendy clothes and a cap. Both are completely contrasting avatars that Varun Dhawan will be seen playing.

The original Judwaa became a huge hit and the fans have been eagerly waiting for the sequel from the time it was announced to witness the most iconic Jodi of Raja and Prem on the big screen after 20 years and that has taken the excitement level of the audience towering high.

Sajid Nadiadwala and David Dhawan who are back to recreate the magic after 20 years will showcase the 90’s blockbuster songs, Oonchi hai Building and Tan Tana Tan rehashed by Anu Malik himself. The team was recently in Mauritius shooting for another song from the original titled, ‘Tu Mere Dil Mein Bas Ja’.

The two leading ladies, Jacqueline Fernandez and Taapsee Pannu will be seen donning the characters of Karisma and Rambha whereas, Varun will be seen playing the double role for the first time.

The film promises to be the entertainer of the year as the twins create confusion and laugh riots.

Produced by Sajid Nadiadwala, directed by David Dhawan, Judwaa 2 is presented by Fox Star Studios and Nadiadwala Grandson Entertainment. The film is slated to release this 29th September.