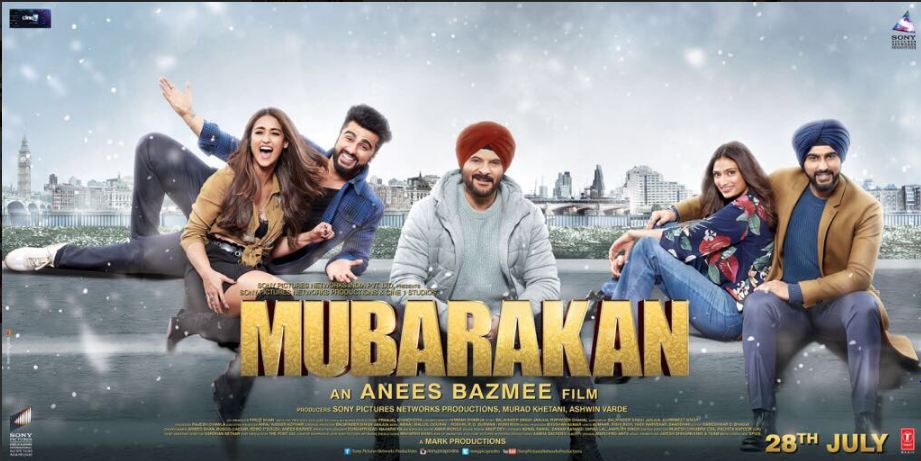 The Mubarakan family is all set to unfold their craziness by giving us a sneak peek into their world with a video that would release Today. The team has released a new poster that showcases the crazy family including Arjun Kapoor, Anil Kapoor, Ileana D’Cruz and Athiya Shetty having a blast as usual.

Mubarakan depicts the story of a crazy Punjabi family caught in the confusion of big fat Indian wedding. The Mubarakan team has teased the audience with another poster announcing a video to be release today. The video will give us more insights into the confusion of the crazy family.

Arjun Kapoor took to twitter to share the poster. He said, “Get ready for more madness from the rest of my #Mubarakan familytomorrow! #10DaysForMubarakan”

As the film is inching closer to its release, the anticipation could be seen only increasing. The Anees Bazmee film is all set to take us on a wild ride of confusion.

Arjun Kapoor would be seen essaying double role, one of the urban guy Karan and the other of a turban clad Charan.

The poster showcases Karan and Charan with their respective partners Sweety aka Ileana D’Cruz and Binkle aka Athiya Shetty. The real life chacha-bhatija would be sharing screen space on celluloid for the first time with this comedy flick.

Anil Kapoor is winning hearts with his comic timing as the Bachelor Sikh Kartar Singh.The trailer of the film has left audiences to laugh in splits with the catchy punch lines.  The sneak peeks video is all set to intrigue the audiences all the more.

The songs ‘Mubarakan’, ‘Hawa Hawa’, The Goggle song’ are already ruling the charts, increasing the excitement for the film.

Directed by Anees Bazmee, Mubarakan is produced by Sony Pictures Networks Productions and Ashwin Varde &  Murad Khetani’s Cine1 Studios and is slated to have its worldwide release on 28th July 2017.