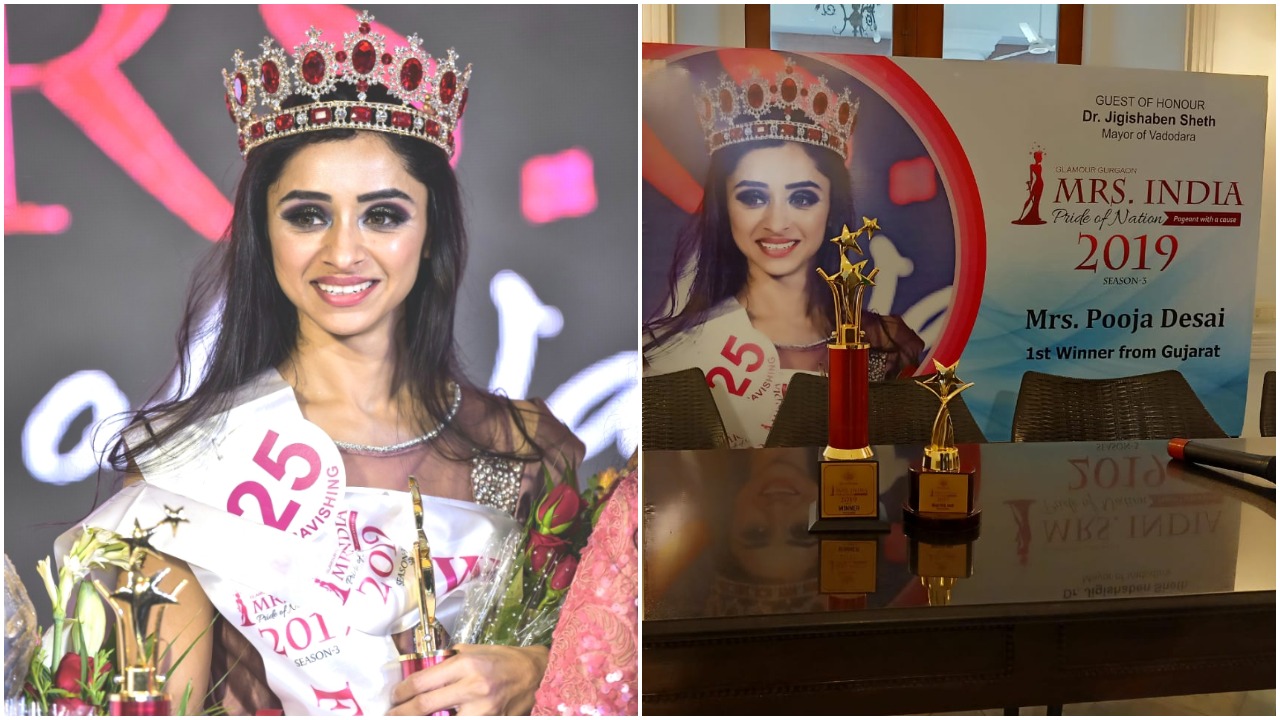 Wish to help women like her to pursue their dreams

"The crown gives me a nice feeling as it gives me the opportunity to relive my dreams which somehow lost in life," said Pooja Desai crowned as Mrs. India - Pride of Nation 2019 along with the subtitle of Mrs. India - Most Beautiful Hair. She was the only contestant from Vadodara and first one from Gujarat to win this title.

Pooja mother of two was jubilant after won the crown in her first ever peagent. The grand finale, organized by Glamour Gurgaon, was held at The Leela Ambience, Gurgaon carries the message on Breast Cancer Awareness. The 100 finalists went through hectic and strenuous training sessions to be groomed for the title. They battled it out over four rounds (introduction, talent, walk, and Q&A) and dazzled the audience with their designer outfits and ensembles provided by the organisers.

"The event was the very good platform for the married women who wants to pursue their dreams. The four days grooming sessions really transformed the contestants and they are blossoming with confidence. The cause of breast cancer awareness was there and all the contestants post the messages on their social media accounts which is a very good initiative. The moment when veteran actress and jury Padmini Kolhapure crowned me was best in my life as she called me as inspiration for married women," said Desai.

Hails from a well established business family Pooja married to a businessman and shifted to Vadodara. She started her own jewellery brand and becomes a successful mompreneur as a creative jewellery designer. She is the Captain of state level All Mothers Handball Team, the only such team from Gujarat.

"I done my MBA from Symbiosis Pune and Import Export course from Vadodara. I started my business as a creative jewellery designer under the brand name 'Ziva' for the last 12 years. Now after won the crown I will try to merge it with the new found success in life," said Desai.

Pooja has all the support from her husband and in laws for the peagent. Infact her husband was the one to push her and register the name in the beauty contest. She has to face lots of difficulties

"My husband Ankur Desai was always supportive and push me to pursue my dreams. Initially I hesitate as being a mother of two it seems difficult. Secondly I was down with Malaria and then Typhoid before the contest. But later from all the support I decide to go ahead. After winning the crown my husband was elated and it gives the self confidence to so something for the women like me," said Desai.

A lady of iron herself, she aims to provide ambitious women with a platform where they can make a difference in the society while establishing their own legacy. "The contest gives me the new found identity. I was just myself and there to enjoy which helps me to won the crown. Now I will work for the women and help them to choose their life and live and what they want to do. I also planning to be a motivational speaker to inspire the women as well as young girls to live their dreams," said Desai.

She also plans to continue her fight for a separate Mother category in Khelmahakumbh in Hand Ball competition as the present age group from 17 to 40 is not suitable for the women like her.

The competition was judged by celebrities like Padmini Kolhapure and Nayani Dixit (fame from movies like Queen, Delhi Belly, and Special 26) among others. This pageant was the vision of Barkha Nangia, Director of Glamour Gurgaon, to equip enterprising women with skills and opportunities to pursue their dreams even after marriage.