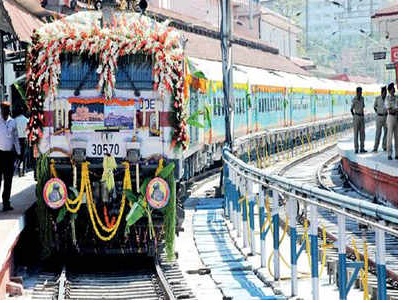 To provide best possible services and facilities to the passengers, Western Railway has added a new chapter in the development of railway infrastructure in the state of Gujarat. Under this ambitious step Prime Minister Narendra Modi will lay the foundation stone of Rajkot-Kanalus doubling Project and Flag Off the new Humsafar Train between Jamnagar and Bandra Terminus  at Jamnagar.

The PM thereafter will lay the foundation stone of Anand – Godhra Doubling Project
at Ahmedabad, inaugurate the Patan-Bhildi New Line by flagging off goods train and dedicate to the nation Modernization of Dahod Workshop and Augmentation Of Freight Wagon POH Capacity to 150 Wagons per month in two different functions to be held  on Monday, 4th March, 2019.

Gujarat CM Vijaybhai Rupani, Deputy CM Nitinbhai Patel will be the Chief Guests of both the functions at Jamnagar and Ahmedabad. Jaswantsinh Bhabhor Minister of State for Tribal affairs will be present at Dahod to partake in the function at Ahmedabad through video link.

The details of various infrastructural projects and passenger facilities are as under:

Rajkot – Kanalus section falls on single line section of Surendranagar – Okha. This section caters to freight traffic from various sidings in Kanalus area, Porbandar and Okha. The limitation of single line section restricts introduction of more passenger trains and also affects the punctuality of exiting trains. Around 38 trains are dealt from Rajkot daily. The completion of this project will enhance the connectivity to the Dwarka. More passenger trains can be run for Dwarka thus beneficial for pilgrims & tourists. It will help to improve the punctuality of passenger trains as well as improve in capacity augmentation. This project coupled with Surendranagar – Rajkot doubling project, which is already in progress, will boost the freight movement from various loading terminals in Kanalus area. The freight traffic from Porbandar & Okha which connects at Kanalus will also be benefited

Similarly, in return direction Train No. 22924 Jamangar – Bandra Terminus Humsafar Express will depart from Jamangar every Tuesday, Thursday & Sunday at 20.00 hrs to reach Bandra Terminus at 10.20 hrs the next day. The regular run for the above trains will commence with effect from 06/03/2019 Ex Bandra Terminus and with effect from 07/03/2019 Ex Jamangar. This train will have AC 3 Tier coaches. The train will halt at Borivali, Vapi, Surat, Bharuch, Vadodara, Anand, Ahmedabad, Viramgam, Surendranagar, Wankaner, Rajkot & Hapa stations in both the directions.

Patan – Bhildi New line project is a part of Bhildi – Viramgam gauge conversion/new line project, which was sanctioned in the year 1990-91. The whole project is situated in Gujarat state. Total length of the project is about 51.03 Km. The project though sanctioned in 1990-91 was frozen till 2007 could gain momentum only after year 2015. In last 3 years Rs.303 crores have been spent to fast track the project. By ensuring timely and correct decision, excellent co-ordination and acceleration at grass root level the project could be completed quickly.

For the longest period of time, Anand and Godhra were connected through a single line. While the two upcoming cities of Gujarat is only 78.80 kms which is a major bottleneck for the increasing frequency of trains. The Doubling will give an operational boost to the rail traffic.  This project will be beneficial for smooth running of traffic and will help to decongest the traffic of the section. The sectional capacity can be increased and punctuality of trains will be enhanced.

Amongst all the major workshops of Western Railway, Dahod Workshop is the oldest workshop, originally for steam engine POH over Western Railway, with its foundation laid on 14th January, 1926 and established in the year 1931. Due to increase in load of Steam Loco Periodic Overhauling (POH) at Lower Parel, Mumbai, the POH activities were shifted to Dahod.  After the closure of steam engines, Dahod Workshop is undertaking all POH activities of Loco, Carriage & Wagon. With the changing times and advancement in technology, steam locos were phased out and other activities like POH of MEMU, DEMU, Tower Wagons, and Midterm Rehabilitation of electric locomotive were started. In fact, Dahod workshop has the distinction of being the only workshop of Indian Railways where MTR of electric locomotives is carried out.

In addition to this the workshop, repairs and supplies wheels to all Electric / Diesel loco sheds and wagon ROH shops of Western Railway. In past few years, assembling of new WAG7 locos were carried out and recently assembling of 8W Tower Car has also been started. Today, Dahod Workshop is spread over 67.77 acres with covered area of 13.65 acres having above 600 machines, 32 cranes managed by staff and officers. Dahod workshop has been ISO 50001 certified for ‘Energy Management System’ as well as ISO 3834 certified for ‘Quality Requirement for Welding’ and 5-S certified for an organized safe, clean and efficient workplace. The modernization and augmentation of Dahod Workshop will increase the capacity of periodic overhaul of freight Wagons at Dahod Workshop to 150 Wagons per month, i.e. 1800 Wagons per year from 450 Wagons per year.