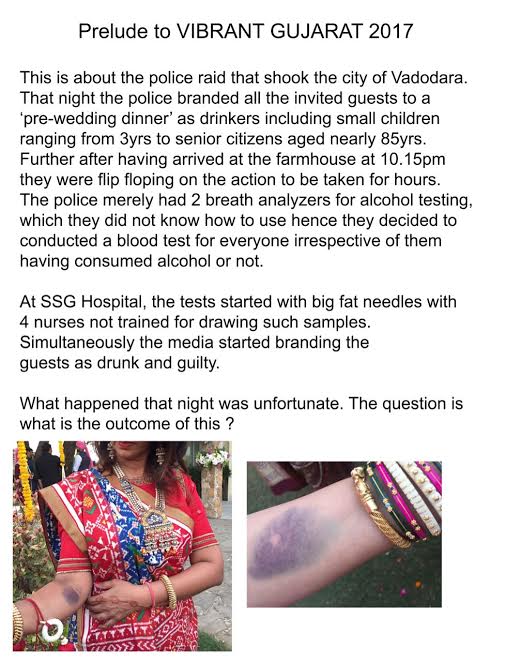 However to check the same the police sent all of them to SSG hospital for blood samples. But many people complaining about reaction in hands after the blood samples was taken. The same was posted on social media condemned the act of police and asked them what is the outcome of this?

Jitendrabhai alias Jitu Shah living in Race course area of Vadodara arranged a pre marriage wedding of his grand daughter at his farmhouse near Kumpad village. The Vadodara rural police raid the farm house after the input of liquor served at the party to the guests. Police detained 273 people along with the bride on the charges of consuming liquor.

The police took all of them for blood samples to the SSG hospital Vadodara instead of breath analysers and the nurses and doctors on duty took the samples for testing liquor traces. However a female relative from the bridegroom side complained of infection and she also posted the same with pictures in one of their groups.

Furthermore there is also a information about a NRI businessman present in the party along with his family of 14 people. All members are not drinking but the police took their blood samples including a senior citizen and all of them went through mental trauma. The NRI was so angry with the procedure that he complained the matter to the PMO office and left for America on Friday after completing the police formalities.

Dr. Shweta Shah MLO of SSG hospital Vadodara and also present in collecting the blood samples said that some persons have thin veins so the black spot and swelling is common and back to normal in two three days.

As per the information the one of the female relative from the bridegroom side posted pictures along with a write up in the social media group. The lady condemn the police act and asked them about the outcome of all this.