Passengers cannot 'opt out' meals on board Vande Bharat Express 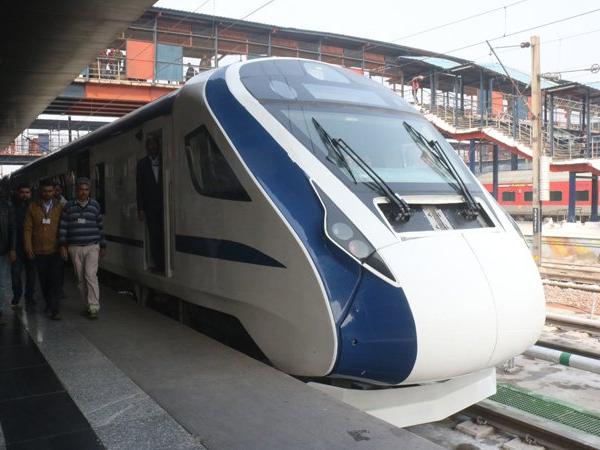 Meals on board soon-to-be-launched Vande Bharat Express or Train 18 will not be optional for passengers unlike in premium trains such as Shatabdi, Rajdhani and Duronto express, where travellers can choose not to take catering services, officials said.

However, passengers travelling the last leg on the route of the semi-high speed train Allahabad to Varanasi will have the choice of opting out of the meals provided by the Indian Railways Catering and Tourism Corporation (IRCTC), in advance while booking their tickets, according to the sources.

The catering charges would not be included in their ticket prices.

For others, the prices of the meals will be part of the ticket fare of the train which will run from Varanasi to Delhi on its maiden journey on February 15.

If the passengers who have opted out in advance want a meal during their travel, they will have to shell out an extra Rs 50 for it, the sources said.

In 2017, the IRCTC made meals on board prepaid trains like Rajdhani, Shatabdi and Duronto (which add the meal prices in ticket) with pantry services optional.

It was done to effectively control unfair practices of overcharging, issues of quality as well quantity and also to avoid wastage of food. This gave the passengers option to 'not eat' if he does not want the food supplied on board.

This also reduced the cost of the tickets on these trains by around Rs 250.

Talking about Train 18, an official said, "The catering charges between the stations have been fixed and they will be added to the ticket fare of all passengers.

"However, passengers boarding the train to travel the final or first leg of the journey from Varanasi to Allahabad or Allahabad to Varanasi may opt out of the catering services. They will have to opt out at the time of booking."

"A separate receipt shall be issued to such passengers by the IRCTC," the source said.

The train which has two classes of tickets -- executive class and chair car -- will have differently priced meals, the source said.

While passengers travelling from New Delhi to Varanasi in the executive class will be charged Rs 399 for morning tea, breakfast and lunch, travellers in the chair car will need to pay Rs 344 for the same.

Those travelling from New Delhi to Kanpur and Prayagraj will have to pay Rs 155 and Rs 122 for executive class and chair car, respectively.

From Varanasi to New Delhi, the passengers will be charged Rs 349 and Rs 288 in the executive class and chair, respectively. They will be served evening tea with snacks and dinner.

The tickets in Train 18 or the Vande Bharat Express, which will eventually replace Shatabdi trains, will be priced higher than the fares of the premium train.

The train will cover the 755-km distance in eight hours with stoppages at Kanpur and Prayagraj. It will be the fastest train on the route. The current fastest train takes around 11-and-a-half-hours to complete the journey.