Opposition throws papers on Governor in UP Assembly 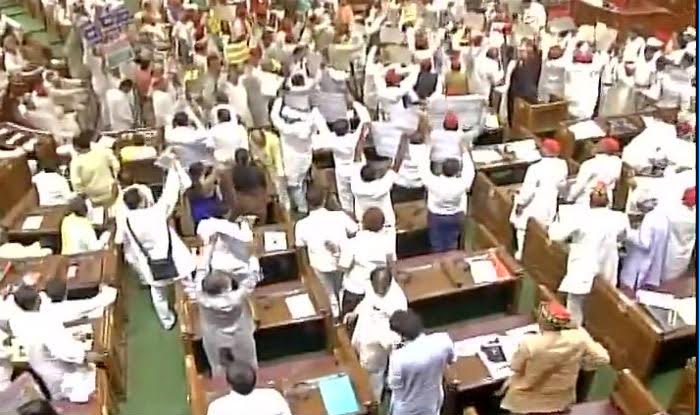 The Uttar Pradesh Assembly on Monday witnessed ruckus on the first day of session over deteriorated law and order situation in the state. The Opposition parties including Congress, Samajwadi Party (SP) and Bahujan Samaj Party (BSP) protested against Uttar Pradesh CM Yogi Adityanath and also disrupted Governor Ram Naik’s speech by throwing paper balls at him.

After getting the top post of UP, the 21st CM of the state had vowed to take stringent steps in improving the law and order in the state, saying, there would be no leniency shown towards it. There was an uproar created in the assembly during the speech of the Governor. Recent caste and communal disturbances in Bulandshahr, Saharanpur, Gonda and Sambhal made SP chief Akhilesh Yadav and BSP question the law and order situation in UP and the tactics of the 44-year-old Adityanath. Earlier the junior Yadav said, “Our party was termed as Gunda party, now what is happening under Yogi’s regime?”

The former CM of UP, Akhilesh claimed that crime under Yogi Adityanath’s rule has increased and people wearing saffron colour have taken the law into their hands.

During a two-day recent training and orientation programme for legislators, CM had stated his intention that the government wants to have at least 90 days of business at the House per year.

In a recent case of deteriorating law and order situation in UP, Yadav’s in Sambhal had destroyed houses of Muslims after a Hindu girl eloped with a Muslim boy. The Muslims had lodged a case of robbery and attack against 15 people.