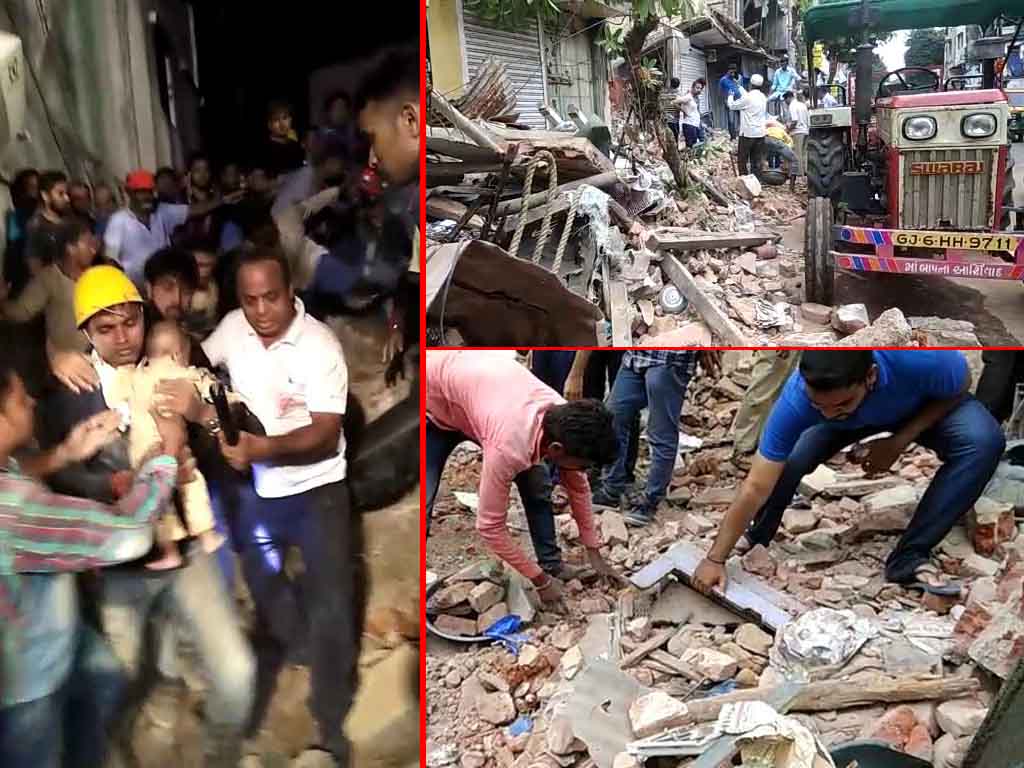 Five casualties including a nine months old baby was reported after a old Building collapsed at at chokhandi near Mandvi old Vadodara. The building was said to be in dilapidated condition and over 45 years old in need of repair. Out of five one died as per the reports from the hospital.

As per the details the Vadodara Emergency Fire Services (VFES) received a rescue call at 2.20 am about a building collapse in the old city area. The first response team from Dandiya Bazaar reached the spot and immediately called for back up and teams from Panigate, TP 13 reached the spot with emergency and technical tools.

“We received the call about the building collapse in old Vadodara at Chittekhan Gali and our first response team reached there followed by the back up teams including 45 fire fighters. Our first priority was looking for the casualties and first search for the bedroom in the building. With time bound and technical exercise we managed to trace the pillows and mattresses and rescued the 9month old Zoya and immediately rushed her to the hospital. Later we rescued four others from the debris and rushed them to the hospital where as per hospital reports one 55 yr old Badruddin Kuwawala died,” said Om Jadeja Fire officer VMC FES.

As per Om Jadeja they use Urban Search and Rescue operation exercise along with time bound location in rescuing the people from the debris. “Four dumpers, 2 JCB, 3 Emergency rescue vans, 2 ambulance along with ultra modern equipments and tools like cutters, manual jacks and others were used in the operation. We also have Accostic device, Thermal Imaging Camera with us as special building collapse tools. VMSS commissioner was constantly in touch with us asking for help in the operation. The locals also help us in removing the debris and rescued the people,” said Jadeja.

The three floor building was totally collapsed and the fire department evacuated the adjacent two buildings as precautionery measure. The fire department use standard operative search operation to evacuate the people in 1.25hours rescue operation considered to be the golden hour.

Total five casualities were reported in the incident where one Badrudin Kuwawala 55 died. Rest Zaherabanu 47, Sameera 27, Shameena 18 and 9months old Zoya are admitted in the hospital.