Be aware to Legal Rights and Laws is important but care must be taken for not abusing them says Lilaben Ankoliya Government of Gujarat, Gandhinagar. The same event was jointly organized by Faculty of Social Work and Faculty of Law, Maharaja Sayajirao University of Baroda. Lilaben Ankolia, chairperson of Gujarat State Commission for Women, was […] 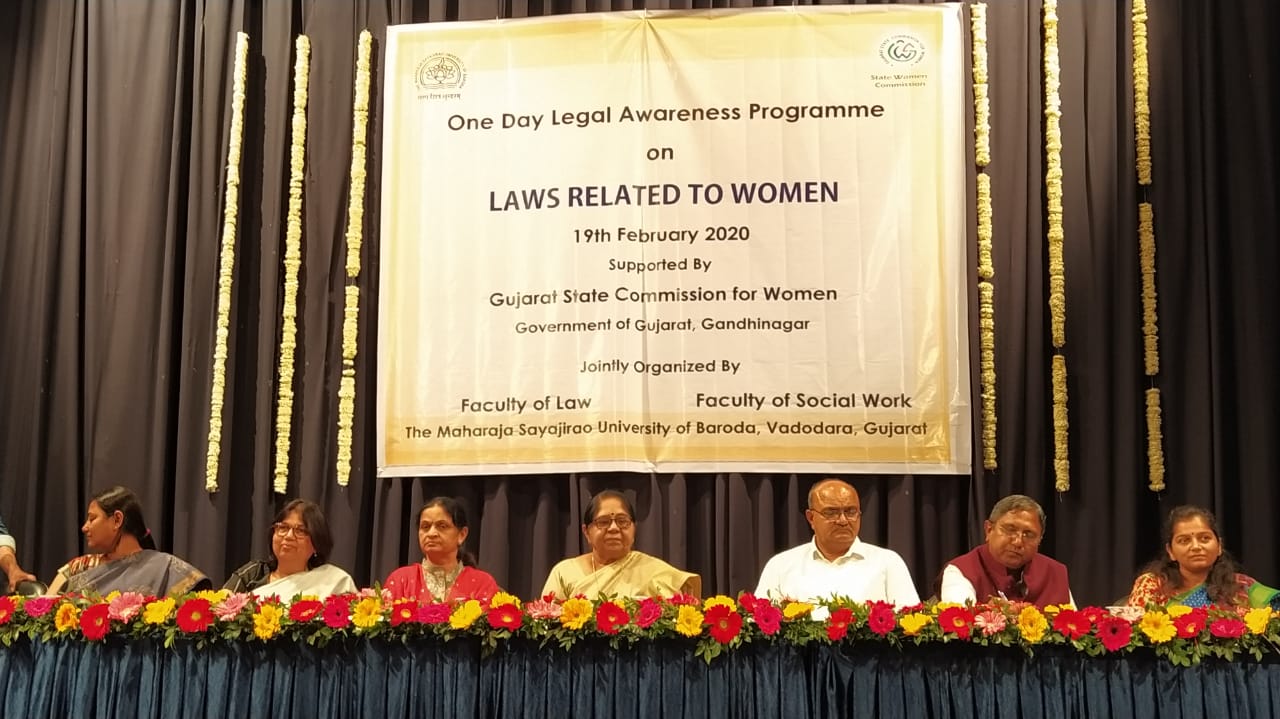 Government of Gujarat, Gandhinagar. The same event was jointly organized by Faculty of Social Work and Faculty of Law, Maharaja Sayajirao University of Baroda. Lilaben Ankolia, chairperson of Gujarat State Commission for Women, was invited as a chief guest for the event.

Leelaben Ankolia delivered the Presidential Speech and made the session very interactive and informative. She explained about the constitution, objectives, functions and role of State Commission for Women in counselling and resolving the disputes of women. She explained the procedure adopted by SCW in resolving the disputes without any delays and mentioned that 40000 cases have been resolved till date.

She talked about the constitution of Nari Adalats and further said that 270 Nari Adalats established in the State of Gujarat have resolved almost 18000 cases. Prime Minister Narendra Modi has decided to establish to establish Nari Adalats in all the states of India adopting the Gujarat Model.

She provided awareness and sensitization among participants about the helpline no.1800 2331111 and 181 available for women.

She informed that Gujarat Chief Minister Vijay Rupani has made a Mobile Application for 181 wherein 58 Lakhs women have participated. She oriented that there are 138 schemes available for Women in the State of Gujarat. She talked on Kavach Scheme started by the Govt. of Gujarat which provide training for self-defense and protection of their self-respect and dignity for students of school.

She put focus on about establishment of NRI Cell by the Government which has successfully resolved issues of NRI marriages like stridhan, maintenance, divorce, custody of children and visa problems. She informed that Social Counsellors are appointed by SCW for providing counseling to disputant parties.

Digital Shakti Programme for Cyber Crime is also launched by SCW. She ended her Speech by inspiring the participants with her words of wisdom and advised young girls to be brave and self reliant to fight against any kind of injustice.

The Awareness Programme was consisting of four sessions on various laws and aspects protecting Women’s Rights.

The first session was on “Women under Criminal Law” and was conducted by Dr. Namrata Luhar, Assistant Professor, Faculty of Law, The Maharaja Sayajirao University of Baroda. She talked on female foeticide, rape, cruelty against women, dowry prohibition and domestic violence with their punishments to be awarded under specific legislations. She also covered newer type of offences against women like stalking, disrobing, voyeurism provided under Indian Penal Code which were added through the Criminal Law Amendment Act 2013. Dr. Luhar highlighted the concern for respect of women which will lead to removal of all these special laws for women.

In the same session, P.M. Rakholia, PSI, Cyber Crime Cell, Vadodara delivered a lecture on “Cyber Crime against Women”. She informed the participants about the various cyber crimes like cyber stalking, defamation, hacking, morphing, obscenity and phishing. Two different documentaries were played during the session addressing real life examples of cyber crime victims and the remedies available to them. Being a Cyber Crime Cell Officer, she highlighted the difficulties in collecting evidences for digital crime. She advised the participants to use strong password, update their software and not to entertain strangers or unsecured websites. At the end of the session, she said “think before you click.” She advised the gathering to call 100 or 112 in case they become victims of cyber crimes.

The second session was conducted by Sabiha Sindh, Advocate, Gujarat High Court who talked on “Rights of Women under Personal Laws.” She talked on various real life cases relating to divorce, custody and maintenance which she had handled in various courts. She broke the myth that the working women are not eligible for maintenance after marriage. Women of any religion can claim maintenance under section 125 of Criminal Procedure Code and aged women can also demand maintenance under Senior Citizens Act. She advised students to practice patience while dealing with matrimonial matters. In the end, she also answered the questions raised by participants like jurisdiction in case of divorce cases and right to Property of women before and after marriage.

In third session, Prof. (Dr.) Bhavna Mehta, Dean (OSD), Faculty of Law and Head, Department of Social Work discussed on a contemporary topic relevant for the present working women culture in India – “Prevention of Sexual Harassment of Women at Workplace”. She deliberated on The Sexual Harassment of Women at Workplace (Prevention, Prohibition and Redressal) Act, 2013, which she quoted as an act conceived in the womb of the most “disgraceful”, “disreputable” and “culpable” act of gender bias, gender inequality, and stereotype. She discussed the provisions of the Act in detail and gave examples of various acts that can be considered as sexual harassment. She advised the gathering to be bold and brave enough to open any incidences in the nature of sexual harassment. She also discussed other issues like hostile work environment, the preventive, prohibitory and remedial measures provided under the Act. She very strongly stated that the University has adopted a “ZERO TOLERANCE” towards acts of sexual harassment. 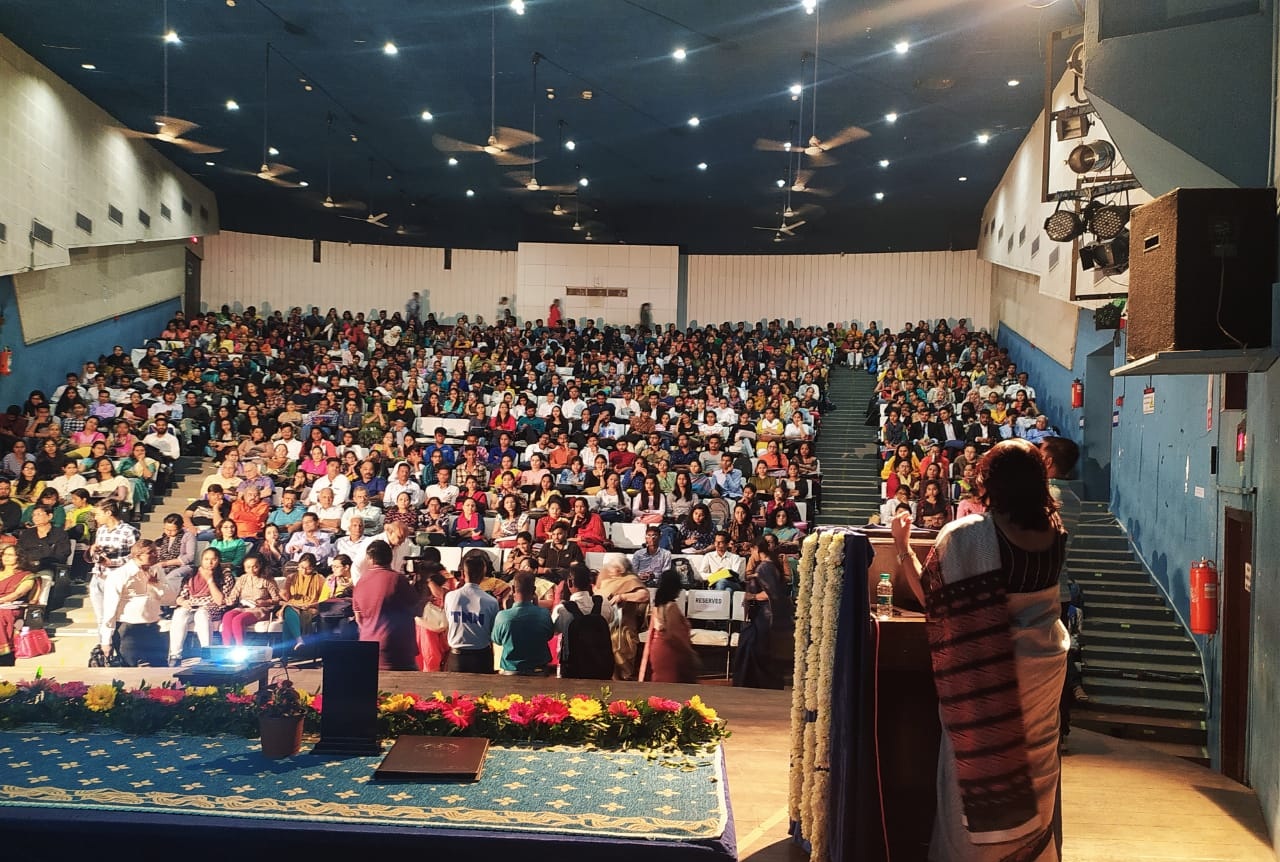 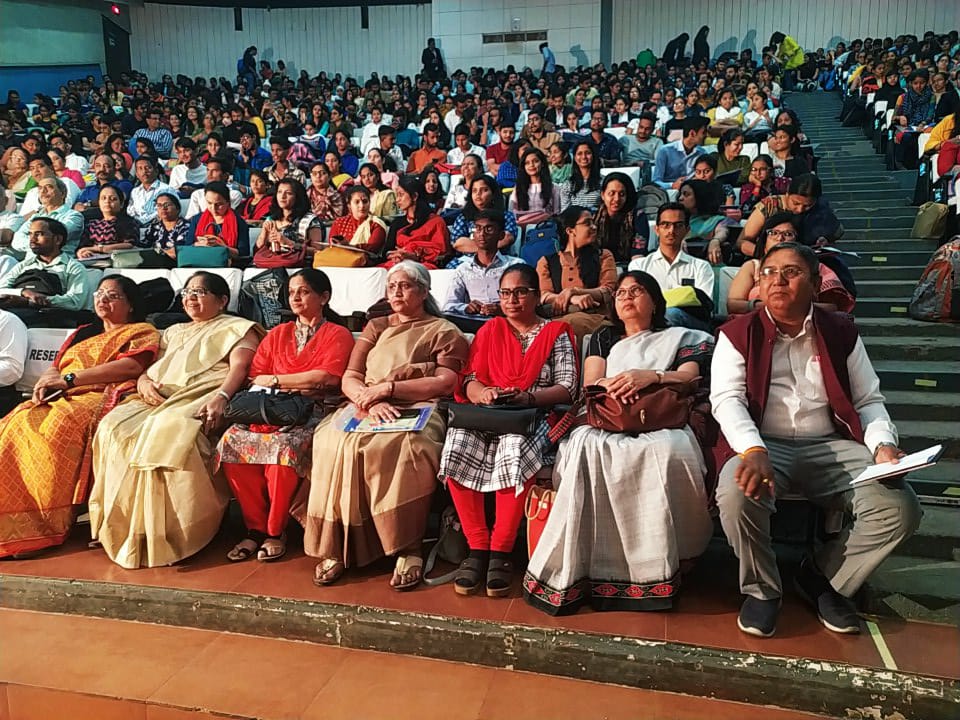 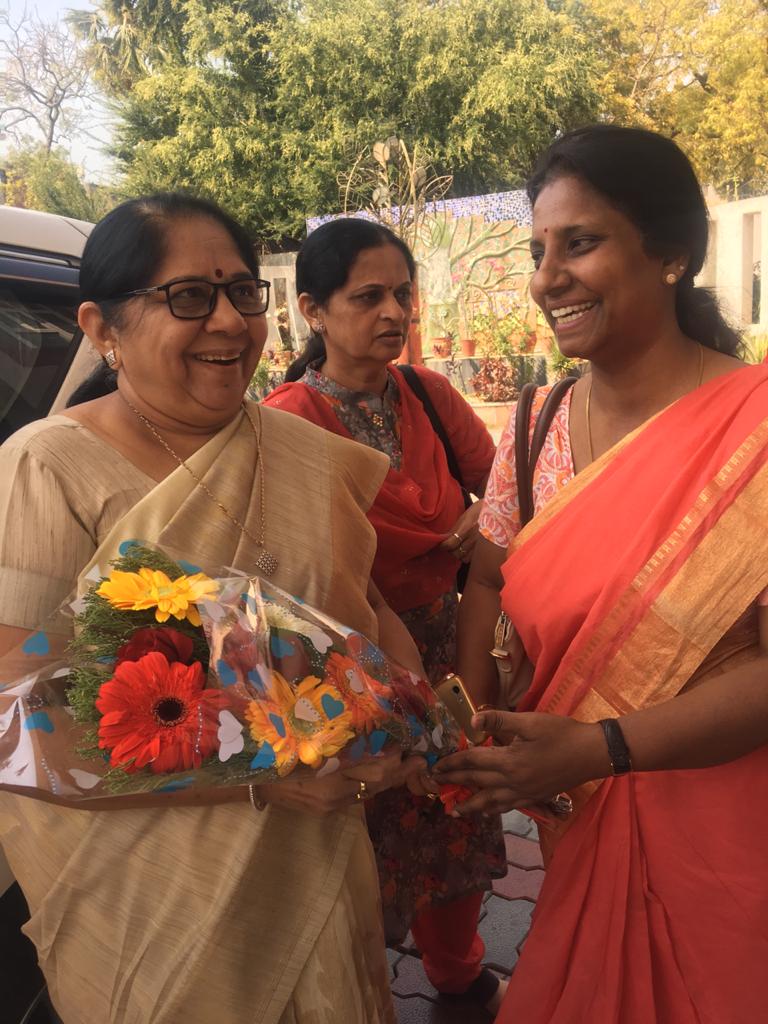 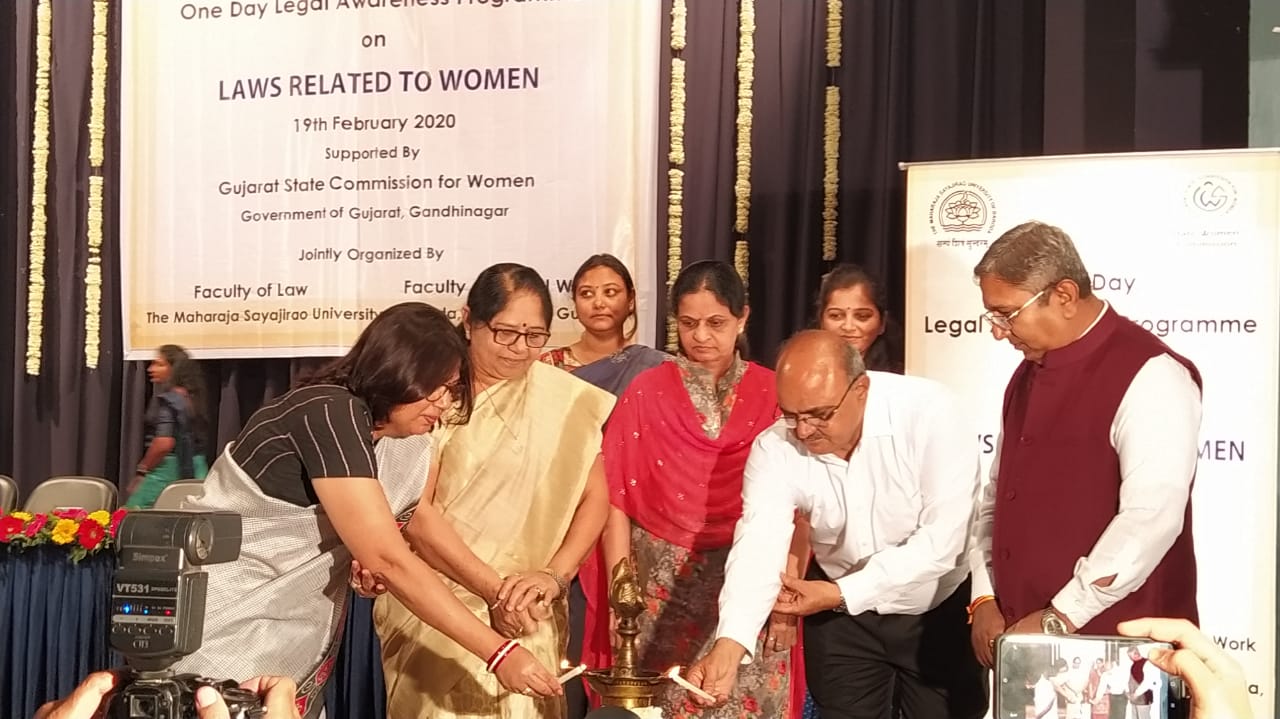 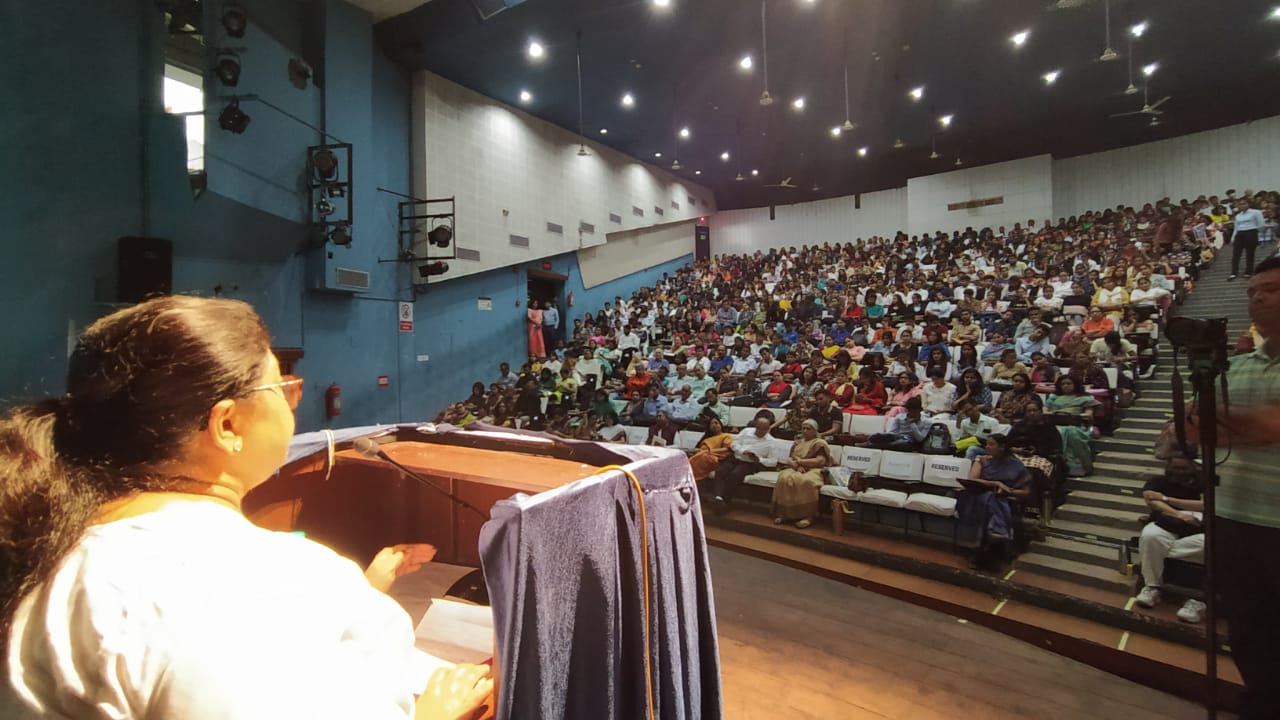 Prof. Adhya Saxena, Professor, Department of History, Faculty of Arts discussed with the participants about existing preventive and redressal mechanism available at The Maharaja Sayajirao University of Baroda. She oriented the gathering with procedure of Women Grievance Redressal, Prevention of Sexual Harassment and Counseling Cell of the University. She informed the participants that the highest body is the Syndicate and the Hon’ble Vice Chancellor is the Appellate Authority with respect to the Cell. She informed that at the Faculty level, Dean is empowered to constitute Internal Complaint Committee where women teaching, non-teaching and students can approach in case of sexual harassment.

Both Prof. (Dr.) Bhavna Mehta and Prof. Adhya Saxena addressed to the questions raised by the participants and provided information about the mechanism adopted in resolving the cases of sexual harassment.

The fourth session was conducted by Ashutosh Raj Pathak, Secretary, Legal Services Authority, Vadodara District on “Grievance Redressal Mechanism established by the Government and the role of NGOs”. He emphasized that Right of justice has been provided by the Constitution which also included the right of complaint against a person. Hence, it is the right of the women to file a complaint in case of a grievance. The mechanism to redress the complaint has been given under the procedural acts mainly Civil Procedure Code as well as the Criminal Procedure Code. Good governance and effective implementation are key to redress the complaints made by women. In view of the Navlakhi Rape Case, 100 Legal Literacy Clubs have been established at various schools across Vadodara in the last 3 months. In this club, a child can directly file a complaint to the teacher instead of approaching the police station and it is the duty of the Principal/Trustee of the school to keep an update of the investigation in this relation conducted by the Police.

Ashutosh Raj Pathak answered many queries of students in relation to reforms in police policies and delay in awarding justice to women. In the Concluding Session, Dr. Jessica Sharma read the proceedings of the Programme. In the end, Dr. Archana Gadekar, Associate Professor, Faculty of Law, The Maharaja Sayajirao University of Baroda proposed the vote of thanks. Feedback was collected from all the participants of the programme. The Programme ended with National Anthem.