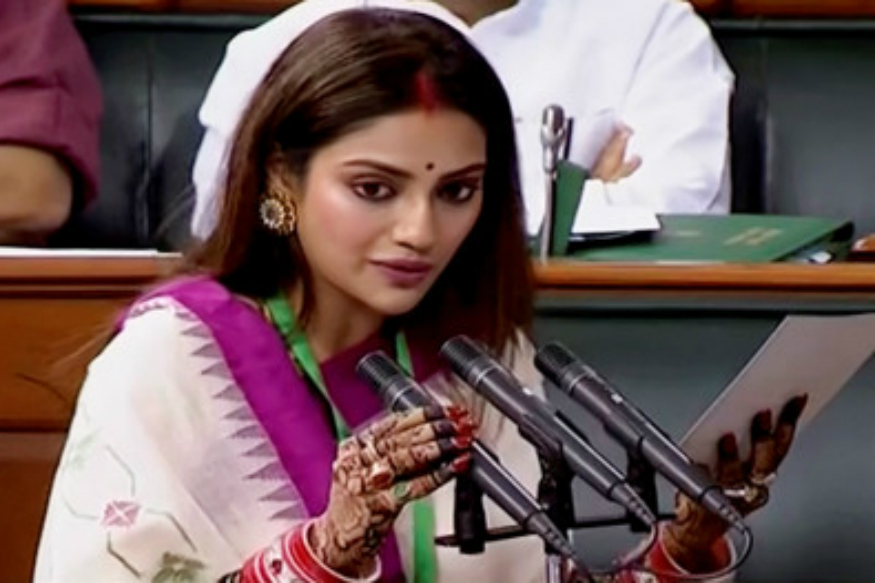 The International Society For Krishna Consciousness(ISKCON) on July 4 will host a special guest, TMC MP from Bashirhat Nusrat Jahan, for the Kolkata Rathyatra.

This invitation from ISCON comes after a Fatwa was issued against Jahan by the Darool Ulum last week. Jahan had attended the Rath Yatra in the past as well.

Nusrat was seen sporting mehendi, bangles, bindi, sindoor, and a mangalsutra while taking oath in Parliament.

She issued a clarification on the fatwa controversy saying that she is still a Muslim but can wear what she wants given that she is a believer in secularism.

Nusrat was quick to respond to ISKCON’s invite on social media and replied with a video on Twitter stating she will attend the Rathyatra, which incidentally falls on the same day as her wedding reception.

“I congratulate ISKCON for organizing the Rathyatra. I will be present at the Rathyatra on July 4 and I invite others to be part of the Rathyatra,” said Nusrat Jahan in a video.

Thank You @iskconkolkata for the invite. It would be my pleasure to be associated with this inclusive event. https://t.co/GyzY03JyHA

A similar controversy had kicked off when she had bowed in front of a deity of Goddess Kali before starting her election campaign. Despite the controversy and the Modi wave, she managed to clinch victory with a considerable in her constituency of Basirhat by defeating BJP’s youth leader Sayantan Basu.

Even though Nusrat’s response to the invitation is likely to upset Muslim hardliners, ISKCON applauded Nusrat for promoting inclusiveness of religious identities.

“Thank you @nusratchirps for accepting the Rathyatra invitation. You are really showing the road forward. Respecting and caring for what others believe and participating in other festivities is a sure way to achieve that elusive social harmony,” ISKCON spokesperson Radharamn Das said in a Twitter post.

Thank you @nusratchirps for accepting the Rathayatra invitation. You are really showing the road forward. Respecting and caring for what other believes and participating in others festivities & celebrations is a sure way to achieve that elusive social harmony..1/2 pic.twitter.com/wKTMXbm0nS

The other part of the tweet describes how ISKCON Kolkata Rathyatra is an example of social harmony where Lord’s dresses and the chariot have been built by craftsmen of the Muslim community for decades now.

Nusrat will be sharing the dais with Chief Minister Mamata Banerjee, who will inaugurate the 8-day spiritual journey of the Rathyatra from July 4 to July 11. The Rathyatra will start from Minto Park in the heart of the city and make its way through different routes before ending at the iconic Brigade parade ground where a fair has been organized.