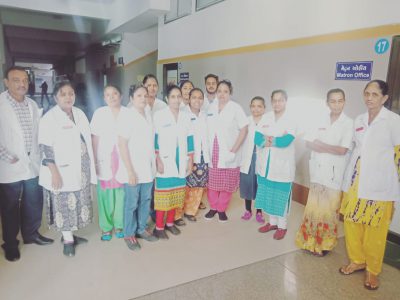 Boycott the uniform and work

Nursing staff from SSG hospital also joined the statewide strike and boycott the uniform. They wear aprons and continue their work in view of not to disturb the patients.

As part of statewide strike the nurses of government hospital observed a day long protest in view of their various demands pending for long. They boycott the uniform and wear aprons to continue the work inside the hospitals.

In Vadodara also the nurses of SSG hospital also joined the strike and work without wearing the uniform. They said after rallies and protest their demands are still pending and now as a second step they boycott the uniform and silently protest against the government.

They also make sure not to disturb the routine and the patients suffer due to their protest.