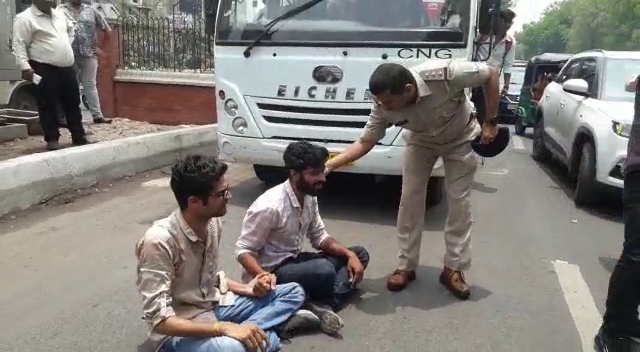 NSUI Vadodara members on Friday disrupts the traffic at Kalaghoda circle in view of their demands to take back the fees increase decision. The UGS also threatened to intensify their agitation and approach to Assembly if their demands are not resolved at the earliest.

MSU GS Vraj Patel said, the authorities increased the fees from 100 to 200 rupees in per unit and higher payment seats every year. This year they increased 2200 to 2300 which is much higher and they are agitating for the same for quite some time now.

After a silent protest in Gandhian way they did not get any positive response from the authorities and hence using different ways to protest against the fee increase issue. They first locked the main entrance and then burnt the effigy of the authorities to press their demands more effectively. On Friday they stopped the traffic at Kalaghoda circle and burnt tyres to protest against the fee increase matter.

The police reached the spot and forcefully removed them as they sat on the road which made traffic standstill in the peak hours. UGS Vraj Patel said that they will continue their agitation against the fee rise and will approach to Assembly if their demands are not resolved at the earliest.